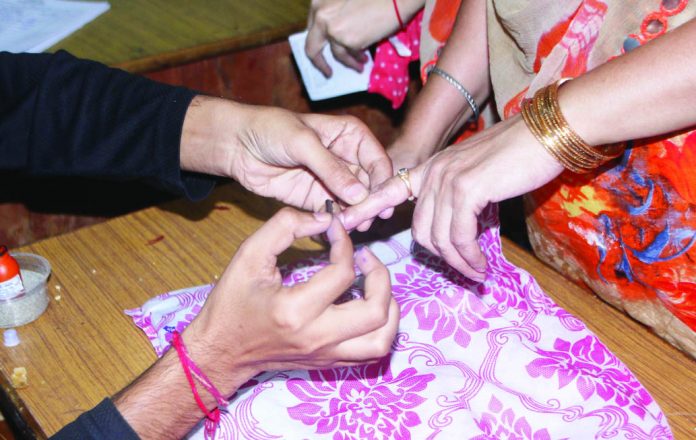 Sanjeev K. Sharma
SUCHETGARH, Dec 4: Badly hit by the cruel Pakistani shelling, border dwellers of Suchetgarh now hope that the Panchayat members, whom they voted today in the seventh phase of Panchayat elections, will help them at least to get proper compensation for the losses they often suffer due to firing and shelling from the belligerent neighbour.
It is pertinent to mention here that the Suchetgarh village remained in news for continuously facing the firing and shelling from Pakistan side damaging houses in the village and killing villagers and cattle there apart from injuring many of them.
Sham Lal 60, a farmer in village Suchetgarh said that his village suffered the most in Pakistan shelling and firing on civilian areas.
“Scores of our cattle were killed in Pakistani firing, our crops were damaged in our fields as we were unable to reap them due to Pak firing, for security we were not allowed by BSF to visit our fields at other side of fence for agricultural activities, our houses were damaged in shelling from Pakistani side and what not,” he said adding that the Panchs and Sarpanchs whom they have voted today will forward their problems to higher authorities.
“The higher authorities at their end should work honestly and do justice and provide us proper compensation as there always remained sky differences in compensating victims of Jammu region and Kashmir division,” he said.
The village Suchetgarh is hardly two kilometres from the popular border outpost of Suchetgarh and a dusty narrow road broken at many places leads to this village with banners of contesting candidates hung at many places in which the candidates stood with folded hands appealing to vote them and their election symbols shown beside them.
There were many bunkers in the village and before entering the road leading to this village there were empty fields with heaps of harvested paddy in them and somewhere at road side one may find some memorials of Army martyrs from the locality.
There was a polling station inside the village at a Government Middle School where voters stood in queues waiting for their turn to cast their votes to the candidates of their choice.
Neha Bharti-a young girl-pursuing MBBS at Government Medical College Jammu was in the line and she informed that she was voting so that her expectations of good roads, proper water and power supply etc should reach to her village, may get fulfilled.
Another young girl, Shikha said that she was voting so that something should be done to ensure safety of the people of her village and the cattle as well.
She informed that agriculture and cattle rearing is the sole source of income in the village as less than one percent of the villagers are in job sector.
Another villager Tara Chand-70 years old had a very sad story to tell as he had lost nine of his cattle in the Pak shelling that hit his cattle shed some months back.
“I was totally shocked as the cattle were my bread and butter as income generated by selling their milk supported my family,” Chand told this reporter adding that only a meagre compensation was paid to him by the authorities concerned for the heavy losses he suffered.
“The shelling from Pakistan side can start anytime all of a sudden while the villagers remain unprepared to face that,” Jeeto Devi, 70 informed, adding that especially at the time of harvest there is rain of bullets and shells from the Pakistani side and the poor villagers are unable to reap their hard work.
She said that as the villagers have now voted for the candidates of their choice so it becomes the moral responsibility of these elected Panchs and Sarpanches to ensure safety to the cattle and crops and, in case of losses, these elected Panchayat members should get proper compensation to the villagers.
Darshan Lal informed that few months back Union Home Minister, Rajnath Singh visited their village and had assured a recruitment rally but nothing like that had happened till date.
Echoing similar views, Karan Singh, 65 said, “While the Government pays lakhs to terrorists to surrender why our boys are not even given a chance to join security forces to serve the nation?”
An octogenarian, S. Rattan Singh informed that when cattle and agriculture are hit by Pak firing, the villagers are left with no option than to opt for labour tasks outside the village to make a livelihood.
He said that the village should have some vocational centres to train the youth so that they may learn skills to earn a livelihood with dignity and expects that same should be done by the new Panchayat team.
Another Panchayat Halqa Abdal in Suchetgarh area too went to vote today.
At a polling station in Government Girls High School Gulab Garh, Abdal, Pritam Singh was Presiding Officer and he informed that the polling was all smooth and villagers too stood cooperative.
A voter Balbir Singh at this polling station said that the only problem in the village was Pakistan shelling and firing on residential areas which has made life in the area a hell.
He said that good work and safety of villagers is expected from the new team which will be elected.
Still another Panchayat Halqa Falora in same Suchetgarh block also went to vote today where many voters complained that though the block was mostly visited by tall leaders yet none ensured safety to the villagers and all the elected politicians only worked for the welfare of their political activists and workers.
These villagers including Gar Singh and others expect that the new Panchayat team should honestly project problems of the village before the concerned authorities.