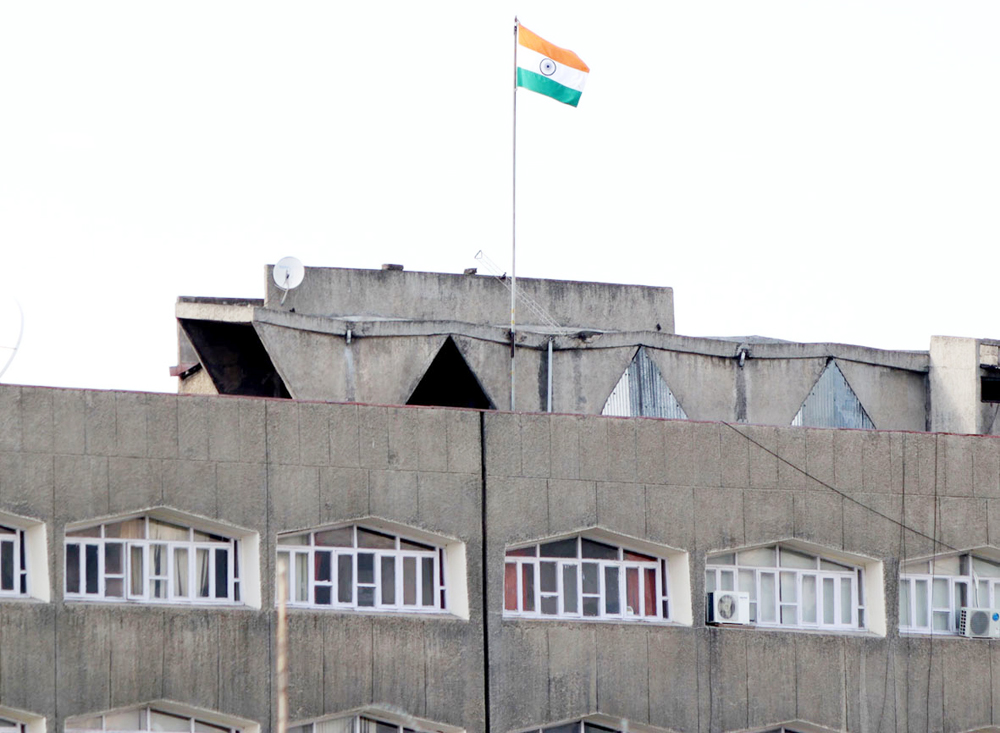 Other Govt offices to follow
Sanjeev Pargal
JAMMU, Aug 25: Sixty seven years after it was adopted by the Constituent Assembly of Jammu and Kashmir, the State flag was today removed from the Civil Secretariat, the seat of the Government and from some of the other State buildings while it will be removed from all other Government offices and vehicles shortly following scrapping of Special Constitutional provisions of the State by the Central Government.
Click here to watch video
Jan Sangh ideologue Shyama Prasad Mukherjee had died under mysterious circumstances in Srinagar in 1953 while defying permit system then prevalent in the State and giving clarion call for ‘Ek Vidhaan, Ek Pradhaan, Ek Nishaan’ (One Constitution, One Head and One Symbol). Sixty six years later, the dream of Mukherjee has been fulfilled with removal of the State flag from atop the Civil Secretariat.
It was on June 7, 1952 that a resolution was passed by the Constituent Assembly of Jammu and Kashmir making the red colour flag with three equidistant white vertical strips depicting three regions including Jammu, Kashmir and Ladakh and white symbol of plough, as the official State flag. Prior to this on July 11, 1939, the flag had been adopted by the National Conference, whose election symbol is also plough.
Sources told the Excelsior that the State flag has been removed from the Civil Secretariat and some other Government buildings as well as official vehicles. Gradually, it will be removed from all the places and official cars, where it used to be placed alongside the tricolor.
“Soon only tricolor will fly atop all the Government buildings and official cars,” they said.
Under Article 370, Jammu and Kashmir was permitted to have its own flag. However, Article 370 was abrogated by the Central Government following approval by the Parliament followed by President Ram Nath Kovind.
With the move, Jammu and Kashmir lost its rights to have a separate flag and will now have to abide by all the laws of mainland India that were earlier not applicable in the State.
Sources confirmed that only the national flag will be seen at all Government offices in the State and vehicles from now onwards.
However, not all Government offices have taken off the State flag yet, sources said; adding that it will take some time for removal of flags at all the places.
Article 144 of the Constitution of the Jammu and Kashmir had stated that flag of the State shall be rectangular 3:2 format. Its colour was red, which symbolized workers and labourers. The white plough in the middle symbolized peasants.
The State flag was mired in controversy first in 2002 when National Panthers Party leader and then Education Minister Harshdev Singh refused to place it at his office as well as official car and then in 2015 during PDP-BJP Government headed by Mufti Mohammad Sayeed, the BJP Ministers too didn’t fix it on their vehicles though the Constitution of Jammu and Kashmir, which was in force at that time, made it mandatory to hoist the State flag alongside the flag of India.
As the issue of non-hoisting of the State flag by the then BJP Ministers was raised by the Kashmir based parties, the then Government headed by PDP patriarch late Mufti Mohammad Sayeed issued a Circular on March 12, 2015 calling upon all Constitutional authorities to maintain sanctity of the State flag at all costs as is being done in respect of the Union flag.
“The flag shall always be hoisted jointly on the buildings housing Constitutional institutions and used on the official cars of the Constitutional authorities,” the Circular had stated.
However, the Circular was withdrawn within a day of its issuance on the ground that its draft hadn’t been approved by the competent authority. The then Government had ordered appropriate administrative action after enquiry into the circumstances leading to the issuance of the Circular.