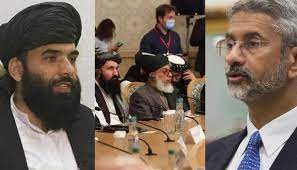 NEW DELHI, Aug 14: The foreign ministry of the Taliban dispensation in Afghanistan has welcomed India’s diplomatic presence in Kabul and promised to ensure security to the Indian mission in the Afghan capital.
In a statement on Saturday, it said India’s diplomatic presence in Afghanistan would result in the completion of “unfinished projects” that India had initiated and the commencement of new ones.
The statement said Afghanistan “welcomes India’s step to upgrade its diplomatic representation in Kabul.”
In June, India re-established its diplomatic presence in Kabul by deploying a “technical team” in its embassy in the Afghan capital.
India had withdrawn its officials from the embassy after the Taliban seized power last August following concerns over their security.
“Besides ensuring security, we will pay close attention to the immunity of the diplomats and cooperate well in endeavours,” it said.
“The Afghan Government hopes that upgrading diplomatic representation and dispatching diplomats would strengthen Afghan-India relations leading to the completion of unfinished projects by India and the commencement of new vital projects,” the Afghan foreign ministry said.
Last month, Taliban supreme leader Hebatullah Akhundzada said no one would be allowed to use Afghan soil to launch attacks on other countries.
India has not recognised the new regime in Afghanistan and has been pitching for the formation of a truly inclusive Government in Kabul, besides insisting that Afghan soil must not be used for any terrorist activities against any country.
In the last few months, India supplied several consignments of humanitarian aid to Afghanistan.
India has been pitching for providing unimpeded humanitarian aid to Afghanistan to address the unfolding humanitarian crisis in the country. (PTI)