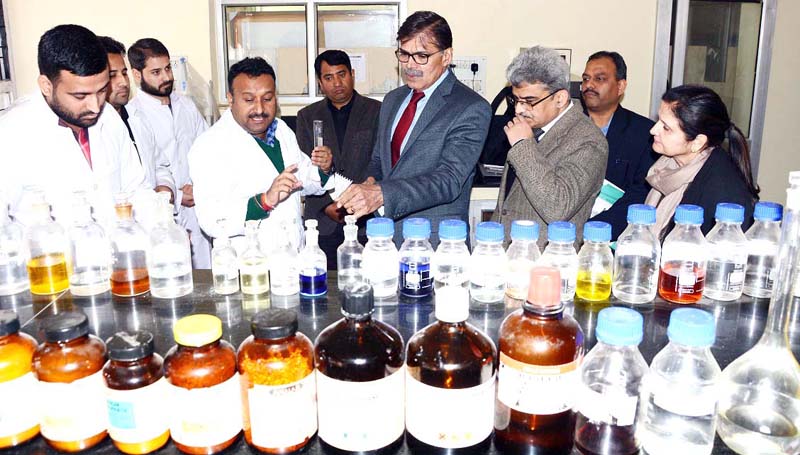 Excelsior Correspondent
JAMMU, Jan 28: Advisor to Governor, K Vijay Kumar has stressed on adopting best practices at Drug & Food Testing Laboratories established in the State and making them fully functional by installing modern equipments, instruments so that sample collected by the field functionaries be tested in for accurate results.
The Advisor said this while reviewing the functioning of Drugs & Food Control Organization during his visit to its office, here today.
Principal Secretary H&ME Atal Dulloo, Controller Drug and Food J&K, Lotika Khajuria, and other concerned officers were present on the occasion.
A brief presentation was made highlighting functioning of the organization with number of samples received for testing, notable achievements registered, initiatives taken with regard to strengthening the organization, role of enforcement wing and details of action taken during the raids conducted in the field etc.
Addressing the officers, the Advisor asked for putting in sincere efforts in improving the overall functioning of this important organization, adding there is a need to adopt modern technology along with IT intervention to make the sample testing an easier process.
He asked the Controller to ensure that the new equipments/machinery lying in the Labs are installed at the earliest and the time taken for conducting sample study be reduced by taking help of new innovations.
Brief discussion was also held on status of court cases and it was directed that focus should be accorded to the most important sensitive cases and same can be taken on priority for their disposal. There should be a proper Legal Cell within the organization so that all such cases be given due attention for taking them to their logical conclusion, he added.
Role of field functionaries including Food & Drug Inspectors was also discussed in detail. The Advisor was informed of the process of colleting samples from the field and sending them to the Labs for analysis. He asked the Controller for further strengthening the enforcement wing of the organization to ensure that only quality drugs and food is available in the market.
K Vijay Kumar said that people violating the regulations in the State should be dealt strongly as per the law and appropriate action must be taken against the defaulters.
Earlier, the Advisor visited Drug and Food Testing Labs, Equipment Rooms, Sample Store, Sample Preparation Rooms established at the office complex. He was briefed by the in-charge Labs regarding their working and whole process adopted for conducting the study of Drug & Food article samples collected from the field.
He also inspected the Mobile Food Testing Labs that are being used in the field to conduct on spot testing of the samples.