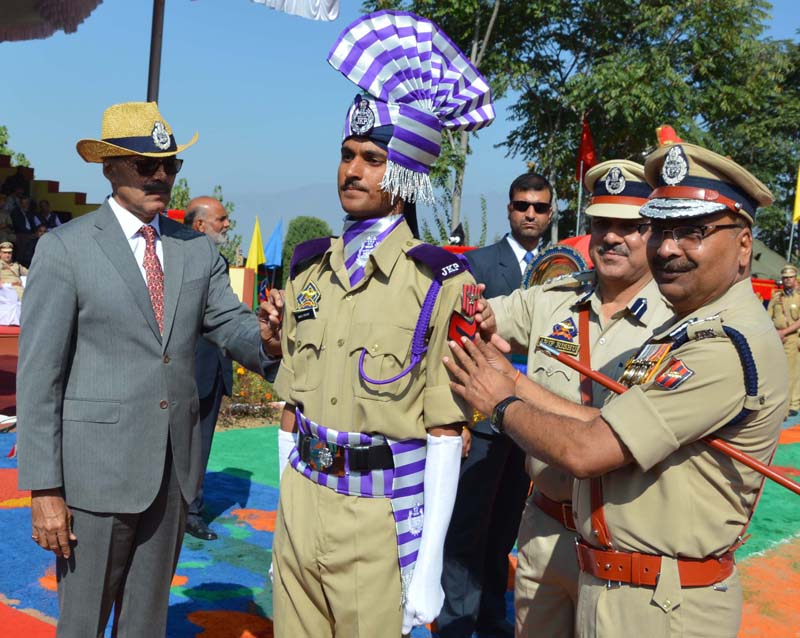 SRINAGAR, Oct 10: Advisor to Governor, K Vijay Kumar today attended Attestation cum Passing out Parade of 6th BRTC-2019 at Commando Training Centre, Lethpora.
DGP Dilbag Singh, ADG Dr B Srinivas, ADGP A K Choudhary, ADGP S Y M Gillani, ADGP Abdul Gani Mir, ADGP Muneer Khan, ADGP Sulelman Salaria, IG CRPF Rajesh Kumar, IGP Vijay Kumar, IGP Kashmir S P Pani, IGP Anand Jain, IGP Surinder Gupta, DIG Atul Goel, DC Pulwama Raghav Langer, senior police officers, other ranks were present on the occasion.
Addressing the passing out cadets who have successfully completed the training at CTC Lethpora, Advisor Kumar congratulated them on behalf of Governor Satya Pal Malik. He asked them to perform their duties with sincerity and dedication after moving out from the centre and remember what they have been taught during their training days by the instructors. ‘Whatever you have learnt here at Training Centre would help you throughout your career’, he added.
On the occasion, Advisor K Vijay Kumar felicitated the best performing jawans in various disciplines. He also took salute of the march past and conducted traditional inspection of the parade.
Earlier, Director General of Police, Dilbag Singh said that Jammu Kashmir Police is committed for the welfare of its people and their families besides focussed attention is being given for the development of infrastructure at all the training centres in the state. He also gave details of the welfare measures taken by his organization for the jawans and constabulary.
Principal CTC Lethpora, SSP Arif Rishu while giving details of Attestation cum Passing out Parade of 6th BRTC-2019, informed the gathering that 431 Jawans from both the divisions today completed the training course for recruitment as Constables. He said that during their BRTC, they have been imparted training as per the laid down procedure.
Principal CTC stated that the batch is comprised of 431 Jawans and out of them, 68 are post graduates and 110 are graduates.
In addition to the basic trainings, various awareness programmes have also been organized during the training period in which experts visited the centre and held interactive sessions with the trainees, he added.

Protest outside Raj Bhawan in support of farmers’ agitation

No person can be tried under NDPS Act without expert opinion: HC

HC directs for security to Panchayat members after threat assessment