SRINAGAR, July 10: Advisor to Governor, Khurshid Ahmad Ganai, today approved a massive expansion plan of Employees State Insurance Corporation (ESIC) for implementation during the next financial year.
The decision in this regard was taken in the 16th Regional Board meeting of ESIC held under his chairmanship. The regional chapter was asked to gear up for reaching out to uncovered areas and large-scale new enrolments.
The meeting was attended by the members of the Regional Board including Commissioner-Secretary, Labour and Employment, Saurabh Bhagat (Vice President), Labour Commissioner Bashir Ahmad Khan, Arun Sharma Administrative Medical Officer (AMO) ESI Scheme, Ashok Kumar Rawat Regional Director, ESIC Jammu (as Member Secretary) and other members including Lalit Mahajan, M. Afzal Parry, Laxman Ravinder Singh, Shiv Kumar Sharma, Kapil Bakshi, and Javid Zarger representing the Labour, Industries, employees and employers of the state.
Ganai who is also the Chairperson of the Regional Board of ESIC expressed his gratitude to Government of India for slashing the premium from 6% (Employer 4.75% and Employee 1.75%) to 4% (Employer 3.25% and Employees 0.75%) of the wages. He said that this step would go a long way in giving a major shot in the arm of this social security scheme.
It was decided in the meeting that measures would be taken to cover all the 5.5 lakh beneficiaries of contributory provident fund scheme under the ESI scheme, which has around 2.63 lakh beneficiaries currently.
The Board also decided to establish a tertiary care 100-bedded ESI hospital at Ompura Budgam for which 40 kanals of land has already been identified. Besides, 30-bedded hospitals would also be set up in the industrial estates at Kathua, Samba, Rangreth and Khonmoh. In order to cater to the uncovered areas, the Board also decided to run ESI assisted state-run dispensaries at Ramban, Doda, Poonch, Kishtwar, Anantnag, Shopian, Kulgam, Baramulla, Ganderbal, Kupwara, Rajouri, Leh, Kargil and Bandipora. This would ensure in bringing whole state under the ambit of the social security scheme provided by ESI Corporation.
An in-principle approval was also given for constitution of state autonomous society under the ESI Act for effective disbursement of medical care facilities in the state. This measure was taken in light of rechristening of the plan by the central government.
Ganai exhorted upon the officers to run the rigorous campaigns for creating massive awareness among both the employees and employers.
The Chairman directed the officers to dispose-off all the pending claims within the next 15 days. He instructed for devising proper mechanism in settling all the 700 pending claims of insured persons within the set deadline. He further enjoined upon the AMO that only medicines of superior quality should be procured and distributed among those availing the services. 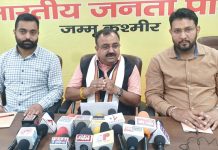 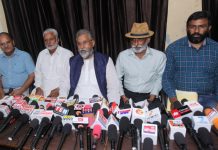