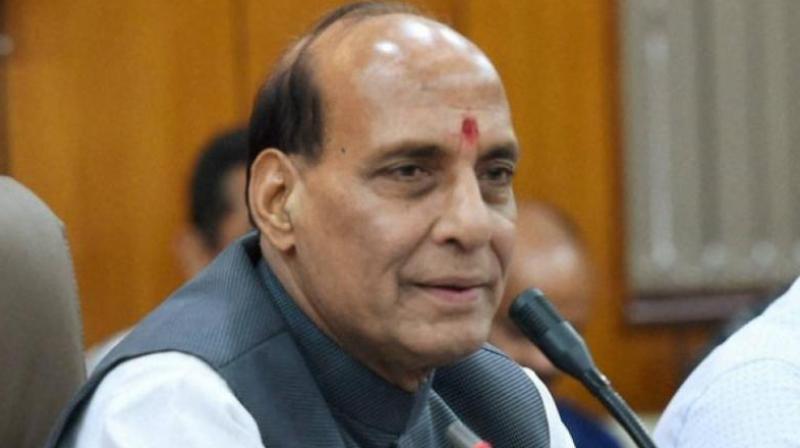 NEW DELHI, Oct 12: Home Minister Rajnath Singh said today that action against the Rohingya and other illegal immigrants should not be viewed through the prism of human rights as India has never ill-treated foreigners.
Addressing the silver jubilee foundation day event of the National Human Rights Commission in New Delhi, Singh said India is a secular country and the human rights are not based on any religion.
“I believe there is no place for inhuman actions in the name of strict action. But it is also my firm belief that actions taken in the national and societal interest should not be seen from the viewpoint of human rights violation,” he said, in presence of Prime Minister Narendra Modi, the chief guest at the function.
The Home Minister said on many occasions, some people express concern over the human rights of criminals or terrorists.
“I want to ask when such a criminal or terrorist not only violates the human rights of others but also takes away their right to live, in such a situation how we can raise the issue of human rights of such criminals,” he said.
Singh said action against illegal immigrants in India should not be seen from the point of view of human rights. “There was no inhuman behaviour towards them. I am happy to note that the Supreme Court’s recent decision was in favour of deportation of seven Rohingyas (from Assam), he said.
The Home Minister said human rights should be seen in proper perspective as human rights means everyone has a right to a dignified life.
“In this direction, our Government has implemented many significant schemes for the benefit of crores of people and provided them food, housing, health and education for girl children,” he said.
Singh also emphasised the importance of women’s safety in India.
He said the NHRC, since its inception 25 years ago, has achieved many milestones and secured a place for itself in the institutional framework of the country.
He also said the human rights have been ingrained in the traditional ethos of India. “In our country, we pray for the welfare of all, wish good for all and desire no harm for anyone. India is the first country in the world to have considered not only human rights but also took care of animal rights”. (PTI)