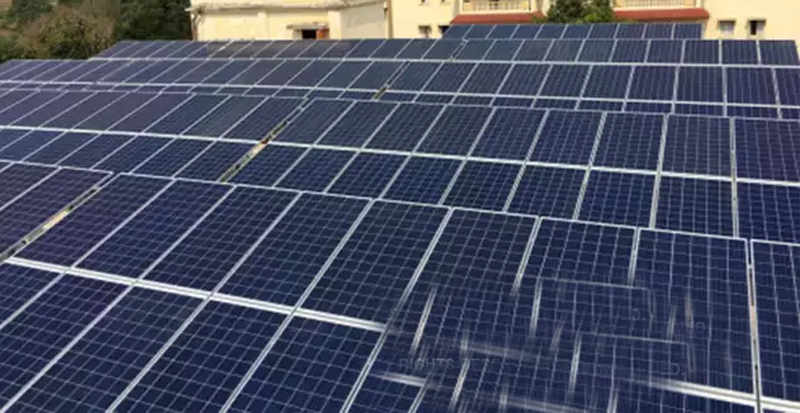 SRINAGAR, Oct 9: In a bid to lower the carbon footprint of the Government buildings in Jammu and Kashmir, the Administrative Council (AC), which met here under the chairmanship of Lieutenant Governor, Manoj Sinha, approved the installation of grid-tied rooftop solar power plants on Government buildings within Jammu city’s municipal limits by the Jammu Smart City Ltd. (JSCL).
Farooq Khan and Rajeev Rai Bhatnagar, Advisors to the Lieutenant Governor, Dr. Arun Kumar Mehta, Chief Secretary, J&K and Nitishwar Kumar, Principal Secretary to the Lieutenant Governor attended the meeting.
The project will be completed by March, 2023 at an estimated cost of Rs 53.10 crore, which shall be recovered at the rate of 22 percent annually on account of savings from reduced dependency on externally purchased power. These installed rooftop solar power plants will also be connected with the main power grid on a net metering basis.
The Jammu and Kashmir Government will benefit from the solar generation of approximately 20 million units of energy annually, over the project lifetime of 25 years. Additionally, the annual carbon emissions are also expected to be reduced by 16,000 tonnes.
On an enhanced scale, besides helping the energy-deficit Jammu and Kashmir in supplementing its energy needs, the model will also help DISCOMs in achieving their renewable purchase obligation (RPO) targets of 10.5% as mandated by the Ministry of Power, Government of India.
Further, the Administrative Council also approved the proposal for the installation of 5000 agricultural solar pumps having a capacity range from 1 HP to 10 HP under Prime Minister’s Kissan Urja Suraksha Evam Uthaan Mahaabhiyan (PM KUSUM) scheme at an estimated project cost of Rs. 135 crore.
Under the scheme, individual farmers will be supported to install standalone solar pumps of capacity up to 7.5 HP. These stand-alone pumps will be connected to the grid to feed surplus power which can be purchased by DISCOMs at a pre-decided rate so as to meet renewable purchase obligation (RPO) targets.
These pumps will provide save farmers with a reliable source of irrigation apart from preventing pollution from diesel-operated pumps.
Initially, 3000 solar pumps will be installed during the financial year 2021-2, whereas, the remaining 2000 will be taken up in the next fiscal year.
Both the projects are expected to boost employment in the Union territory by creating opportunities for engaging 1100 people in the highly skilled in business development, design, sales, procurement, and project management; semiskilled and unskilled personnel in cleaning and upkeep activities during the entire life cycles of the projects.
Meanwhile, the Administrative Council has accorded the administrative approval for construction of the District Court Complex at Kathua at an estimated cost of Rs. 29.73 crore.
Earlier, two new courts of Additional District & Sessions Judge and Munsif were created in the District Court Kathua, which were made functional temporarily in the existing infrastructure.
The construction of the District Court Complex will provide the required office space for their smooth functioning besides establishing new infrastructure for auxiliary business units, food courts, stationery depots, vendor shops etc.
Meanwhile, the Administrative Council has also approved the proposal of the Health and Medical Education Department to create 24 posts for strengthening the Trauma Hospital Bijbehara, Anantnag.
The hospital has been created under the Centrally Sponsored Scheme namely “Capacity Building for Developing Trauma Care Faculties on the National Highway” with an aim to strengthen the trauma services in existing health care institutions along the National Highways. The objective is to bring down preventable deaths because of road accidents by developing a trauma care network in which no trauma victim has to be transported for more than 50 kms.
The trauma hospital will now engage 24 additional consultant surgeons, physicians, anesthetists, ortho-surgeons, radiologists, and medical officers, besides sufficient para-medical staff and technicians for ensuring round-the-clock critical care to the patients from south Kashmir and reduce accident-related casualties due to complex injuries.
In addition, the Administrative Council also approved creation of one post of Professor in the Department of Blood Bank in Government Medical College, Srinagar. This will address the gaps pointed out by the National Medical Commission and also to fulfill the norms for starting of DNB courses in the college.