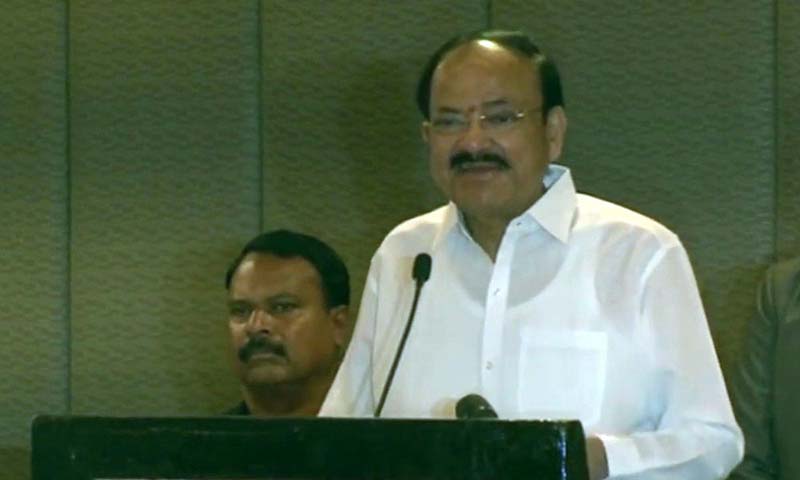 AMARAVATI(AP), Aug 27: Vice-President M Venkaiah Naidu today said abrogation of Article 370, which granted special status to Jammu and Kashmir, was not a political issue but a national one.
Interacting with eminent citizens in Vijayawada at a meet-and-greet programme, he said it was the “need of the hour.”
“It was long overdue. Abrogation of Article 370 is good for the country, though there could be some temporary issues. It is not a political issue but a national issue..,” the Vice President remarked.
Recalling that he was very anxious when the Bill was introduced (in Rajya Sabha), Naidu said, “I burnt the midnight oil over the rules and only wished there is debate, discussion and decorum in the House.”
Quoting Jawaharlal Nehru’s speech of November 1963, the Vice-President noted that Article 370 was only “temporary and transitory”.
While 110 laws made by Parliament were applicable across the country, only Jammu and Kashmir was exempt, with even reservations not being implemented, he pointed out.
“Some parties realized the injustice and supported abrogation of the Article,” he added.
Though only four hours were allotted for discussion on Article 370, the House deliberated on it for over six and a half hours with every member getting an opportunity to speak.
“The Rajya Sabha adopted the Bill with a two-third majority while the Lok Sabha passed it with 4/5th majority, he pointed out and expressed happiness over it.
The Narendra Modi-led Government at the Centre had on August 5 announced the removal of some provisions of Article 370 to take away Jammu and Kashmir’s special status.
It also proposed bifurcation of the State into two Union Territories-Jammu and Kashmir and Ladakh-a far-reaching decision that seeks to redraw the map and future of a region at the centre of protracted militancy. (PTI)