E-Paper
Home Todays story Aadhaar not mandatory for some services 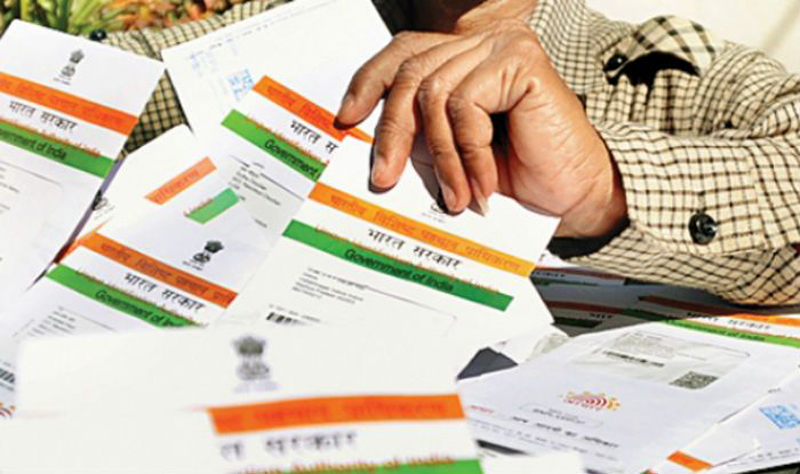 NEW DELHI, Sept 26: In a verdict with far reaching consequences and described as balanced, the Supreme Court today upheld the Constitutional validity of ‘Aadhaar’ but limited the scope of the controversial biometric identity project, ruling it is not mandatory for bank accounts, mobile connections or school admissions.
Holding there was nothing in the Aadhaar Act that violates right to privacy of an individual, a five-judge constitution bench headed by Chief Justice Dipak Misra in a 4 to 1 verdict also cleared the use of Aadhaar for welfare schemes after a long-drawn legal battle against the government’s ambitious project–the world’s largest biometric ID database.
The court, however, held Aadhaar would remain mandatory for filing of Income Tax(IT) returns and allotment of Permanent Account Number (PAN).
It struck down Section 57 of the Aadhaar (Targeted Delivery of Financial and other Subsidies, Benefits and Services) Act, 2016 that permitted private entities like telecom companies or other corporates to avail of the biometric Aadhaar data.

Ruling that Aadhaar authentication data cannot be stored for more than six months, the court also directed the Government not to give Aadhaar to illegal immigrants.
Justice D Y Chandrachud gave a dissenting judgement in which he ruled the Aadhaar Act should not have been passed as Money Bill as it amounts to a fraud on the Constitution and is liable to be struck down. But the majority verdict by Jjustices A K Sikri, Ashok Bhushan and A M Khanwilkar besides the CJI upheld the passage of the Aadhaar Bill as a Money Bill by the Lok Sabha.
Observing that Aadhaar was meant to help the benefits reach the marginalised sections of society, it said the scheme takes into account the dignity of people not only from personal but from the community point of view as well and served the much bigger public interest. Aadhaar means unique and it is better to be unique than being best, it said.
“Aadhaar gives dignity to the marginalised. Dignity to the marginalised outweighs privacy,” justice Sikri said while reading out the operative part of the 1,448-page judgement in the packed courtroom of the CJI. “One can’t throw the baby out with the bathwater.”
The court held it would not be mandatory to link Aadhaar to bank accounts and the telecom service providers cannot seek its linking for mobile connections.
It would also not be mandatory for school admissions, as also for the examinations conducted by the Central Board of Secondary Examination, National Eligibility cum Entrance Test (NEET) for medical entrance and the University Grants Commission, the court said.
Dealing with other issues, the court quashed section 33(2)of the Aadhaar act in the present form that allowed collection of data of an individual under the scheme on grounds of national security, saying an officer higher than the rank of a Joint Secretary should be given such a power.
Finance Minister Arun Jaitley hailed the verdict as historic while Information Technology and Law and Justice minister Ravi Shankar Prasad said it “empowered democracy”.
Former Attorney General Mukul Rohatgi said the judgement was “balanced”.
Justice Chandrachud’s dissenting judgement in which he said that bypassing the Rajya Sabha to pass the Aadhaar Act amounted to subterfuge and is liable to be struck down as violative of Article 110 of the Constitution was seized by the Congress.
Article 110 has specific grounds for Money Bill and the Aadhaar law went beyond this, justice Chandrachud said, adding that in the current form, the Act cannot be held to be constitutional.
Welcoming the verdict, Congress leader Kapil Sibal told reporters his party supports the views of Justice Chandrachud.
Sibal said it will certainly move court if amendments in the Aadhaar Act brought after this verdict are not brought in Rajya Sabha for discussion.
Justice Chandrachud also said it was now impossible to live in India without Aadhaar and it was violative of Article 14 and if it got seeded with every database, there was a chance of infringement of right to privacy.
West Bengal Chief Minister Mamata Banerjee welcomed the verdict and termed it as a victory of the people.
BJP spokesperson Sambit Patra hailed the verdict as a big victory for the “pro-poor Modi government”.
The verdict was pronounced on a bunch of 31 petitions, including one by former High Court judge K S Puttaswamy after concluding on May 10 a marathon hearing that went on for 38 days, spanning four-and-half months. The Aadhaar case was the “second longest” one in terms of days of hearing after the historic Kesavananda Bharati case of 1973.
Reading out the operative part of the verdict, justice Sikri said robust data protection regime has to be brought in place as early as possible, noting that the attack on Aadhaar by the petitioners was based on violation of rights under the Constitution, which they felt led to a surveillance state.
Justice Bhushan agreed with the view that there was no need to link Aadhaar with mobile numbers and rejected the argument that revealing demographic information for Aadhaar amounted to violation of Right to Privacy, saying an individual revealed such data for other ID proofs.

Aadhaar: What needs to be linked, what does not
The Supreme Court today brought out the list of services for which biometric ID Aadhaar needs to be mandatorily linked, and the ones for which it is not required.
SERVICES REQUIRING AADHAAR LINKING:
* It is mandatory to link PAN with Aadhaar.
* Aadhaar is compulsory for filing Income Tax returns.
* Aadhaar must for availing facilities of welfare schemes and Government subsidies.
SERVICES NOT REQUIRING AADHAAR LINKING:
* It is not mandatory to link bank account with Aadhaar.
* Telecom service providers cannot ask for linking mobile number with Aadhaar.
* CBSE, NEET, UGC cannot make Aadhaar mandatory.
* Aadhaar not compulsory for school admissions.
* No child can be denied benefits of any schemes on not being able to bring Aadhaar. (PTI)