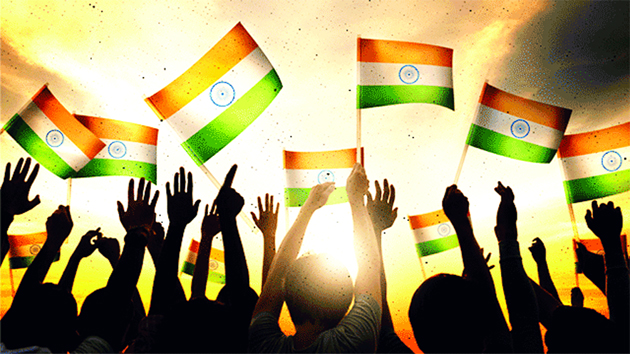 Kalyani Shankar
What does the crystal ball say about the year 2022? As we enter the new year, it is time to look ahead and gaze at the future. Of course, much can happen, which is unexpected and unknown. The year will be one of the multiple pivots: Economic, environmental, political, social, and personal. In short, 2022 will be challenging politically while the economy and Covid are unpredictable.

India will be entering the new year with a great deal of anxiety and pride. The country will celebrate the seventy-fifth year of Independence, a landmark in Indian history. The country has passed through many trials and tribulations, and the most significant achievement is the survival of democracy and the transfer of power seventeen times without any trouble. When India attained Independence, many western countries predicted it might be fragmented, but history reveals that they have proved wrong.
A glance at the crystal ball reveals that the elections will be another critical subject next year. Polls will be held for the office of President and Vice President, to Rajya Sabha, state assemblies of 7 states, including the Uttar Pradesh and some bye-elections.
The BJP is likely to get its candidates as President and Vice President. The BJP can get a majority of votes because of its strength in Parliament and state Assemblies. It will be a test for the opposition as it does not have the number to get its candidates elected.
Whether incumbent president Ramnath Kovind will get a second term or BJP will think of a new president is not known. Also, whether Vice president M. Venkaiah Naidu will be elevated is unclear.
The upcoming state elections are crucial to the national parties and regional parties like the Samajwadi Party, Bahujan Samaj Party, and some smaller outfits for their survival. Also, it is likely to be a pointer for the 2024 General elections.
The seven states that are going to polls include UP, Uttarakhand, Punjab, Goa, Manipur, Gujarat, and Himachal Pradesh. The BJP enjoys power in four states – Uttar Pradesh, Uttarakhand, Goa and Manipur – while the Congress is ruling in Punjab. Political equations are changing fast.
Meanwhile, the opposition parties are sharpening their knives against the ruling BJP. They have enough poll issues. They include anti-incumbency, handling of Covid-19, inflation, the crime rate, law and order situation, farmers’ protests etc. Another significant issue is the caste politics in the U.P.
The BJP is trying to woo the Muslim, unsure Brahmins, upset Jats and Other Backward Classes (OBCs). The U.P State government has announced a hike in sugarcane purchase prices for farmers.
Congress Party has a chance to improve its performance in the poll-bound states provided it sorts out the leadership crisis, factional fights and indiscipline. Rahul Gandhi might take over the party next year.
At the national level, the BJP would like to expand its power in as many states as possible. The problem is that the party does not have strong state leaders. Winning UP is crucial for the saffron party. The BJP depends on Modi to get votes. The divided opposition is a strength for Modi.
Regional parties like the Samajwadi Party, Bahujan Samajwadi Party, AamAdmi party etc., could slide if they don’t perform well. The multi-cornered contest might not be good for the SP, BSP and the Congress because the votes get splintered.
The Union Finance Minister Nirmala Seetharaman will present the new budget in February, indicating the government’s direction. Health care and education will get more allocation. The rural economy is likely to be the focus. Global investment will be encouraged, promising better ease of doing business. The economy depends on how Covid will behave in 2022.
India would like to play a significant role in foreign affairs. The G 20 presidency allows India to display its global vision. Modi has developed a rapport with most international leaders in the past seven years.
Pakistan will continue to be a problem. The relationship with China might improve. Sri Lanka will be the destination for the Prime Minister when he goes for the 5th edition of the Bay of Bengal Initiative for Multi-Sectoral Technical and Economic Cooperation (BIMSTEC). India could play a meaningful role in Afghanistan.
Many foreign visits are planned for the Prime Minister next year. He may visit Africa, ASEAN Region, Europe, West Asia, Russia in 2022. PM will visit the European nation for the 6th Indo-German Inter-Governmental Consultations (IGC), and will also meet the new Chancellor of Germany, Olaf Scholz. He will participate in the ASEAN summit later in the year in Cambodia. The next in-person QUAD Leaders summit may take place in Japan in the second month of 2022.
On the whole, the year 2022 is full of challenges and apprehensions. caution and prudence are required in tackling the multiple issues that might arise.