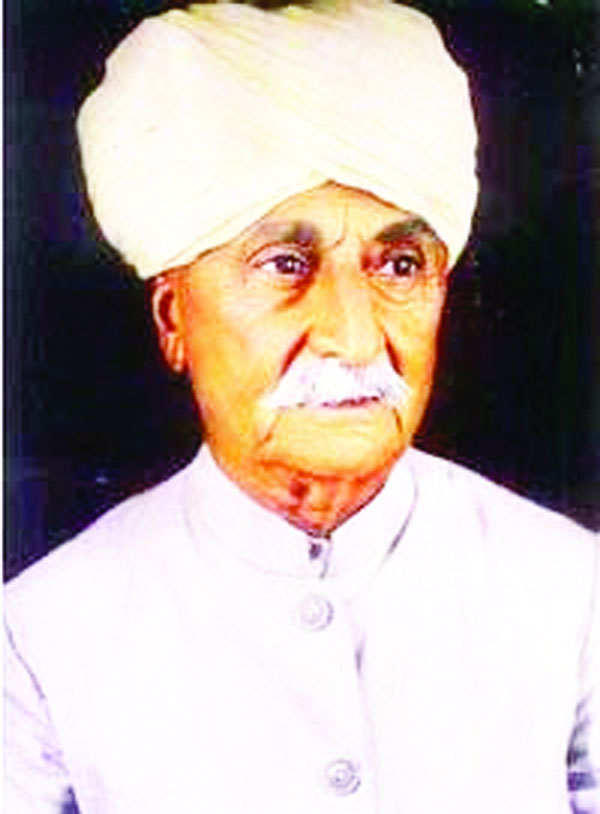 Ravi Rohmetra
“TU NAHI TERI ULFAT,ABHI TAK DIL MEIN HAI, BUJH CHUKI HAI SHAMMA, ROSHNI ABHI TAK MEHFIL MAIN HAI”
Duggar land has its own brilliant and unique history. It has given birth to academicians, social workers, politicians, singer, actors and leaders of Calibre. One product and prominent amongst them has been Pt. Prem Nath Dogra. This is the tale of towering personality who worked selflessly for cause of the people. He was a friend, a guide and a social worker. During his life time, he was counted amongst the great personalities of Jammu. A personality who shared weal and woes of needy. This was the main aim objective of Pt. PremNathDogra. The feeling of helping and supporting the masses, especially poor was so deepened in his heart and mind that he always loved to face all kind of odds or eventualities for the pleasure of other. He always believed that service to humanity is the service to god. This is the basic reason that the poor masses remember him as their god- father and his name is being taken with great love, respect and honour . He was born in village Smailpur on 24th of October, 1884. He after schooling in a village school, graduated from Foreman college Lahore in 1908. Besides his academics, he was prominent athlete, also won many prizes in sports field. He served the State Govt. after joining as Tehsildar in various capacities and was even given the post of Lent Officer in-charge BhadarwahJagir of Maharaja and later became the WazirWazarat( Deputy Commissioner). He was a very principled person and acted judiciously in dealing with the problems. He was at times accused of not having dealt with many agitators in Srinagar. The vested interests then manipulated for his premature retirement. His retirement was a boon to him as he got ample time to interact with the masses to know the issues and problems. On social side, he founded Hari Jan Sewa Mandal to help the upliftment of Hari-Jan. Dauntingly on march he gave birth to Brahman Mukhya Mandal to help eradicate social evils in Brahman society. Besides he emerged as leading member of Dogra Sadar Sabha, was elected member of Jammu Municipality and remained its Vice- President for a decade till 1949. All this gave him prominence and in 1945 elections, he was elected to assembly (Praja Sabha). He during 1963-64, was the Sangh-chaalak at RSS for J&K. The then Prime Minister of J&K Sheikh Mohd. Abdullah arrested him in 1949 on concocted blames but Jammuites agitation forced his release. All efforts of the then government failed to help Sheikh Mohd. Abdullah to dominate and detain Pt. Dogra.Pt. Dogra was now elected president of J&K Praja Parishad (1950-1964), then he got himself relieved from there. He was staunch believer of democracy in real sense and fought for uniformity all around the country under the slogan “EK NISHAN, EK VIDHAN, EK PRADHAN’ and to gave full unquestionable integrity to the country. The agitation to achieve above motives attracted jail for him for nine months.
Though detained in Kashmir, he was elected Member Assembly in 1957, then also in 1962 and 1967 from Jammu City North. He proved to be a great parliamentarian and earned praises of his opponents like the then Chief Minister Gulam Mohd. Bakshi and G. M.Sadiq. He even rose to level to hold the President’s post of All India Jan-Sangh for the year 1955-56. He led the Jan-Sangh group in the Legislative Assembly. To sum up, Pt. Dogra proved to be a true and faithful solider of the soil and everyone is proud of him. In his whole life, Pt. Dogra while serving State Govt. in various capacities, had not taken Government accommodation, Kothi or Quarter, not even a vehicle. This shows his love for simplicity and dedication, who stood for secular values throughout his life. He served the people of the State for a long time in various capacities and always worked for poor and down-trodden sections of society. He was a real friend of people and a man of high stature. Pt. Dogra was an institution in himself whose principles, ideology, concern for Jammu and commitment for full integration of the State with the rest of the Country coupled with his pain for the society, earned him the distinction of being recognized as Sher-e-Duggar. The role of PanditJi in “EK VIDHAN, EK NISHAN, EK PRADHAN ” agitation and similar other demonstrations was splendid which made even the Kashmiri Leaders to respect him as a great Dogra leader .
Pt. PremNathDogra Ji is a symbol of sacrifices and service to the society. He devoted his life for the cause of Mother India and he would be remembered for all times to come. No doubt, PanditJi is not with us, but due to his selfless service for mankind, his name will always live in our hearts. An epitome of humility and resilience, Pt. Dogra went on to become on of the most enduring icons of India.
(The author is a Social worker & Writer)
feedbackexcelsior@gmail.com

Congress in the cobweb of quandary