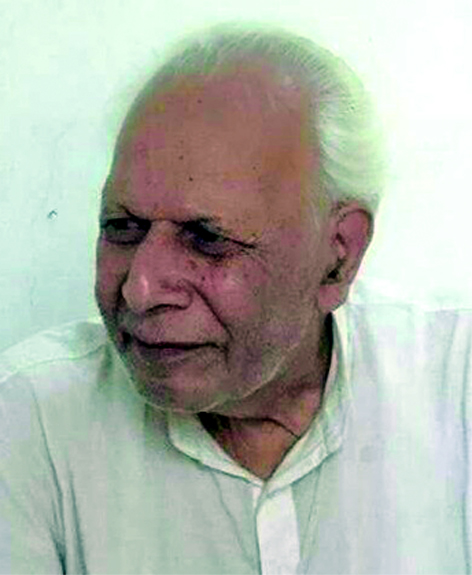 Prof. Virender Rawal
May 12, 2018  was the unfortunate and gloomy day for the literary circles of the state of Jammu and Kashmir .  On this day, P N Koul Sayil, a household name in Kashmiri leela, devotional songs breathed his last.
Since making of bio-films became my passion to immortalise our icons so I thought I would make a film on Bhagwan Gopi Nath Ji Mahraj, a renowned spiritual saint of Kashmir. T N Ganju ‘Vishwas’ referred me to P N Koul Sayil for his help in my pursuit in this connection. I did not know anything about Sayil at that time. P N Koul Sayil happily agreed to help for making the script. On completion of the script, I came to know about his poetry, bajans and gazals that he had written. I could not believe to be talking with a person whose lyrics had remained most popular and continue to be all-time hits. I used to get goose bumps on listening to the songs “dil tchooran dil nyoom shaman paamun thavnem jai” sung by Raj Begum and “pamposh malai travay nael” sung by Vijay Malla when I was youth. I could not believe that I was sitting in front of one of the icons of his times. With some unknown divine intervention I, there and then, decided to make film on the living legend Sayil Sahab. And the bio-pic on Sayil entitled Profile For Progeny-1 was released and screened in K L Saighal hall on 6th of December 2009.
P N Koul Sayil’s poetic capabilities are deeply rooted to important historical era. In 1925-1926 Maharaja Hari Singh took over as the king of the state. During this period, Cultural Revolution started having its grip in the state with the help of various cultural organisations. This revolution was somewhat very powerful because some of the organisations were financially sound and some were operating through voluntary organisations. In 1941-1942, a new type of revolution started in two Colleges in Kashmir. This revolution was started by IPTA (Indian People Theatre Association). Some renowned people got associated with this revolution and under their leadership a fresh revolution started even after the independence in 1947. The drama groups, poets, writers, artists came together and were successful in carrying on the message of benefits of independence to every nook and corner of the valley. They made people realise their rights and duties while living in a free country. This was the time when the common person of the state was least aware of Cultural Revolution and its impact on the whole society.
This revolution was divided into three categories in 1953 .One category constituted painters only. Other constituted writers and poets and the third category constituted actors and musicians.
Jashn-e-Kashmir started. Echoing of drama, music, art, poetic sessions were heard all over. Artists from other parts of the country were invited for the participation in Jashn-e-Kashmir. Among the crowd of artists, dramatists, poets and writers in Jashn-e-Kashmir was found Prathvi Nath Koul Sayil.
Sayil was born to Late Sh. Tara Chand Koul at Shalla Kadal Habba Kadal Srinagar. Sayil was trained graduate senior teacher. He had diplomas in painting & decoration to his credit. He had expertise in Kashmiri, Hindi and Urdu languages. He was an ace writer, producer and broadcaster. Besides being a renowned poet, he was an excellent calligrapher and stage actor as well.
His father being a Persian literate was able to expertise Sayil in this language right from his childhood. Sayil’s maternal uncle Pt. Maheshwar Nath Maheshwar was a renowned spiritual poet. It is he, only, who generated the spark of poetic attitude in Sayil. Home environment of Sayil was overall spiritual and that had a tremendous impact on him too.
Sayil came in contact with Pt. Dina Nath Nadim, an eminent poet, Principal of Hindu High School Badiyarbala while studying in primary class. Sayil considered Nadim to be not only his best teacher but also his mentor. At the first very moment, when Nadim saw Sayil writing poems, he said ‘bachcha kutchh bolta hai’. Nadim instructed all the concerned teachers to go on giving him homework until he is comfortable in writing poems. The group of five friends who were named as Nadim’s Panjpyare, were Makhan Lal Bekas, (Newsreader), Dr. Shankar Raina (Storywriter), J.L.Kaul (Editor Din Manas), P L Ogra  and Prathvi Nath Koul Sayil. Nadim gave all of them their pennames. Because of the wonderful handwriting, Nadim gave Prithvi Nath Koul the penname of Sayil. Sayil gives credit for his beautiful calligraphy to untiring efforts of his father. It is due to his wonderful handwriting that he was always in demand by various dramatic clubs and similar organisations for writing the scripts, in Hindi, Urdu or in Kashmiri. Sayil was also a good actor and a stage decorator as well.
Sayil’s bajans won tremendous accolades from the public. His numerous bajans are still on the tip of the tongue of Kashmiri Pandits.
Sayil’s poetry has a very big canvas. From writing spiritual songs to gazals, to nazams, and to naats have exceptionally made Sayil heartthrob of all.
P N Koul Sayil has also written dramas and operas like waqtuk partav, nigheban, rang bulul, athwas, nazre nazre ,prathvi mangal (opera),shiv arti (opera), oh! oh! oh (tv serial), intizar(serial), oal mo raavin kaanse and many more.
(The author  is a freelance documentary filmmaker)