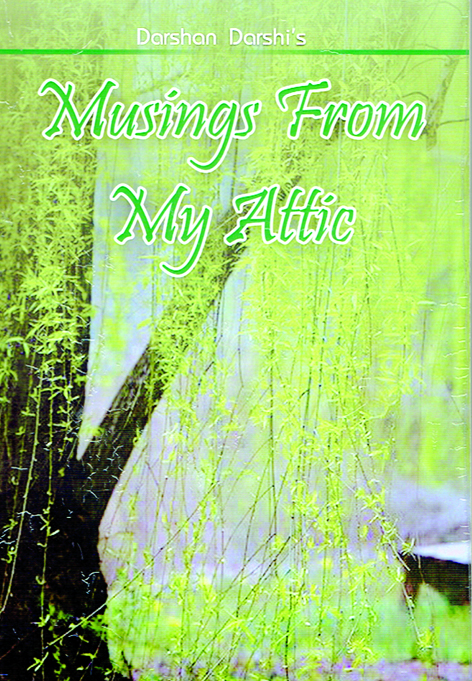 This  book in English contains 39 essays on variety of relevant issues and topics which at once attract the readers  and keep them glued because of curiosity and interest. I have gone through this 152-page Darshan Darshi’s  “Musings From My Attic” valuable and educative  essays and finished reading it in just two days.  While  reading the  book I was impressed by the wide range of  topics , in-depth treatment of each  essay,  in  easy to understand language  and  lucid style. Overall , Darshan Darshi has  conveyed a definite meaningful message especially to the younger generation. In these literary pieces he has shared  his vast knowledge and rich experiences. Basically, the  poet in him  gets free flow of ideas as also flight of imagination to impart  some new ideas and ideals.
”    Musings From My Attic” book contains essays to name only few are: “Tricks of the Trade”,” Taj Mahal mera hai!”,”Survival of the Book”, “Afrain of Each Other”, “Patience-A Life Skill”, “Be True to Yourself”, “Money Matters”,  “Am I  Depressed or Just Confused?”, ” Relationship Quotient of India and Pakistan”, “Handling an Argument” , “Of Age and Money” “What is There in  a  Name?”and “Why do you come to School”. These and other right-ups do impart one lesson or other based on the thinking and experiences of the writer.
Sharing  Experiences
It is noteworthy that quite a number of writers of Jammu and Kashmir are now actively engaged in putting out publications enriching the Indian Literature.
There are only few who right in English catering to the English readership. Darshan Darshi,   a pen name of D.K Vaid who is basically devoted to the Dogri  writings and  a reputed poet and recipient of Sahitya Akademi Award during 2006s as also  a retired Civil servant. He is presently Convener of Dogri in the  Sahitya Akademi, New Delhi. He has   written in almost all genres Dogri Language & Literature, including literary criticism. He also uses his pen for English and   emerged as a reputed writer.
Lessons Thro’ Essays
The Dogri language has been producing  some outstanding poetic compositions ,many prose works and also a few research-based  books but the genre of “essays”  are attempted only by  gifted literary persons. This book by Darshan Darshi  is some total of his wide experience , flight of imagination and depth of emotions which at once attracts the readers and  constantly sustain their curiosity and interest. Darshi’s  style of writing  in Dogri is always captivating but  this book in English has carved out a specific space in the  literary  creative work. Each essay imparts some lessons after griping  the readers to go through them and get benefitted . So  it is suggested that all the readers must  enjoy reading  this book which is informative and also interesting. Can we also make a plea that a Dogri version of  the “Musings From My Attic”  may be attempted by  the author?
Rewarding for Readers
The book has been well produced , finely  printed and in superb literary style which  promises to quench the thrust of readership. It is good that it has been  moderately priced . While this volume  is very  useful  for the  common man  particularly the youth to learn the  lessons of  life. It  also has particular importance for the people  so that they are put on  a right path  of  moral values , a forward looking  vision and  awakened  citizens.