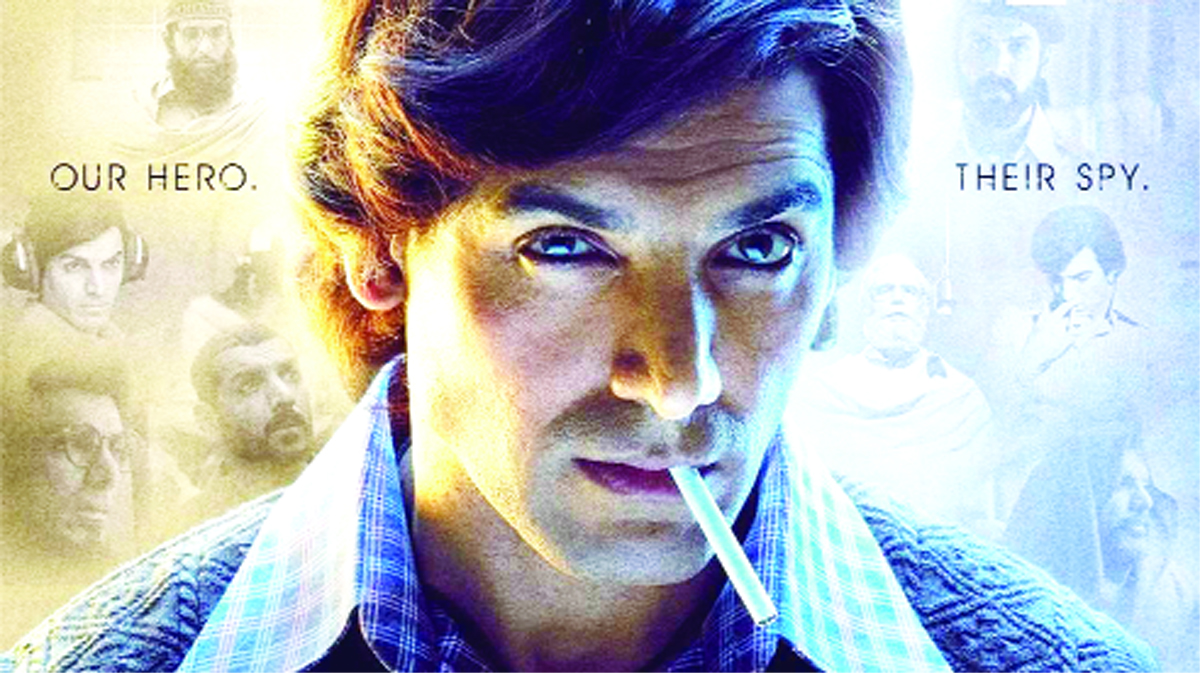 ROMEO AKBAR WALTER is the story of a patriot who takes extreme risks while spying in enemy country. The year is 1971. Romeo Ali (John Abraham) works in India in a bank. He stays with his mother Waheeda (Alka Amin) who is overprotective about him since Romeo’s father had died while serving the country. Romeo too has the passion to work for India but is unable to do so due to his mother. However one day he meets Shrikant Rao (Jackie Shroff), head of RAW, and he asks Romeo to join them and spy on Pakistanis on their soil. Romeo agrees and before leaving for training and eventual trip to Pakistan, he lies to his mother that he has been promoted in the bank and that that’s why he has been sent for training. In Pakistan, he manages to smartly win the trust of arms dealer Isaq Afridi (Anil George), who’s very close to General Zorawar (Purnendu Bhattacharya). While spying on their conversations and activities, Romeo stumbles upon an important information. The Pakistani forces are planning an air strike in Badlipur area of the then East Pakistan. This part of Pakistan is getting rebellious and wants independence. The rebels meanwhile are being trained by Indian forces and a lot of them are stationed at Badlipur, where the Pakistanis plan to drop bombs. What happens next forms the rest of the film.
Robbie Grewal’s story is promising and could have made for an exciting thriller. Robbie Grewal and Rahul Sen Gupta’s screenplay however is very weak and flawed. The scenes don’t flow well and the narrative is quite incoherent. Audiences might not be able to easily comprehend what’s going on. There are too many loopholes that even a layman will be able to point out. Robbie Grewal, Ishraq Eba and Shreyansh Pandey’s dialogues are well worded but nothing memorable.
Robbie Grewal’s direction is not upto the mark. It is evident that he has put in a lot of research but it’s of no use when you are not able to use it well. Moreover, audiences won’t be able to help but compare the proceedings with RAAZI and it was a far superior product. So this factor also comes in play. Except for the final scene, one doesn’t root for Romeo. His bond with his mother seems half baked. Even the romantic track with Parul (Mouni Roy) seems forced. The makers don’t even bother to show what happens to Parul later on.
ROMEO AKBAR WALTER has a shocking start but then goes downhill. The film suffers from problems at many places. Audiences might not be able to comprehend what’s going on in the story. Quite a few sequences are difficult to digest especially how Pakistanis start to trust Romeo so easily. A few scenes do spark interest like the intermission point, Colonel Khan (Sikandar Kher) searching Romeo’s house, the lie detector test sequence etc. But such scenes are immediately followed by not-so-exciting or flawed developments. The last few minutes do evoke patriotism and tries to move viewers and the makers succeed only partly as it comes too late in the day.
John Abraham gives his hundred per cent. The film might disappoint but he won’t. His deadpan expressions work very well for his character. Mouni Roy has an interesting part to essay. Though she does well, her character gets a raw deal. Jackie Shroff is dependable but at places, it’s difficult to understand what he’s speaking. Sikandar Kher oozes fear and terror and gets the accent right. Suchitra Krishnamoorthi (Rehana Kazmi) is fine but has very little to do. Anil George is damn impressive. Raghubir Yadav (Mudassar) leaves a mark. Purnendu Bhattacharya is okay. Rajesh Shringapure (Awasthi) and Nawab Afridi (Shadaab Amjad Khan) do well.
The music has no scope and seems forced. ‘Bulleya’ fails to strike a chord. ‘Maa’ is forcefully added. ‘Vande Mataram’ is played in the end credits. ‘Allah Hoo Allah’ is needless while ‘Jee Len De’ is there for just a minute. Hanif Shaikh’s background score is quite loud but works in enhancing impact.
Tapan Tushar Basu’s cinematography is appropriate. Madhur Madhavan and Swapnil Bhalerao’s production design gives the film a nice retro touch. Same goes for Ameira Punvani’s costumes. The clothes worn by Mouni is in sync with the era shown. Prana and Pixel D’s VFX is passable. Nilesh Girdhar’s editing is quite slow and the film is too long at 144 minutes.
On the whole, ROMEO AKBAR WALTER fails to impress as it suffers from a flawed script as well as a weak and lengthy execution. At the box office, it will have an uphill task to register impressive numbers.
Courtesy : https://www.bollywoodhungama.com