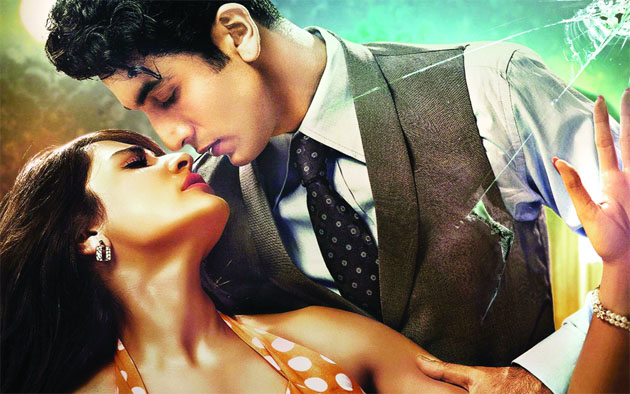 Saibal Chatterjee
Ambition isn’t a bad thing at all for a film. But when a big budget Mumbai movie sets the bar too high for itself, it inevitably courts the peril of falling short.
Bombay Velvet, a stylishly mounted period crime drama, does just that. It flatters to deceive.
But, to director Anurag Kashyap’s credit, he at least attempts an act of daring. So what if he ends up paying a price for it.
Bombay Velvet provides intriguing glimpses of the city at a time when it was seeped in the culture of jazz music but was grappling with the constrictions imposed by prohibition. Both facets of 1960s Bombay find pride of place in the somewhat patchy screenplay.
Bombay Velvet is an adaptation of a story taken from Princeton University professor Gyan Prakash’s book, Mumbai Fables.
It is a high-stakes, star-driven project, so Bombay Velvet is forced to be judicious about the aspects of urban history it opts to incorporate into its narrative. And that is not the film’s only failing.
It would have landed stronger blows had it been more consistent in the way it weaves the drama of the life of a pugnacious 1960s street fighter into the history of a city that is no less than a tenacious pugilist who gives as good as he gets. It is easy to see that Bombay Velvet is a diligently crafted film into which a lot of hard work has gone.
It is also enlivened by some energetic but measured acting. Yet, in the end, it feels strangely soulless.
The first half of the film, which unravels a web of greed, ambition and intrigue intertwined with the tantalizing promise of redemption that love brings, is riveting.
Not so the second half, which is a meandering string of brawls and shootouts (a few featuring machine guns, no less).
We witness a drab cat-and-mouse game between bare-fist boxer Johnny Balraj (Ranbir Kapoor) and popular jazz crooner Rosie Noronha (Anushka Sharma) on the one hand and smarmy media mogul Kaizad Khambatta (Karan Johar) and newspaper editor Jimmy Mistry (Manish Chaudhary) on the other.
It all ends in an uncontrolled explosion of violence that engulfs the real purpose of the film, which is to throw light on the making of a metropolis. Bombay Velvet’s action unfolds in a world infested by self-serving politicians, greedy entrepreneurs, gold smugglers, bootleggers and land sharks. There are allusions to a leftist labour movement taking shape against the plans to hand over prime real estate on a platter to wealthy developers.
But that strand of the story isn’t pursued long enough to lead into the early stirrings of the sectarian politics that is a reality in today’s Mumbai. Bombay Velvet is far less a panoramic history of a modern urban centre that is home to one of the world’s most expensive business districts than a straightforward story of star-crossed lovers up against a brutal world. Ranbir Kapoor blends, to great effect, his natural charm with the cold, clinical ruthlessness of a man who has come up the hard way.
Anushka Sharma as the seductive jazz singer alternates between coquettishness and emotional despair without missing a beat.
Bombay Velvet has several other fine performances by Satyadeep Mishra (Johnny Balraj’s friend Chimman Chopra), Kay Kay Menon (crime branch sleuth Vishwas Kulkarni) and Manish Chaudhary.
But what did Kashyap see in Karan Johar that enthused him to cast him as the smooth-talking villain? To put it straight, he is no actor.
Bombay Velvet is just about watchable. It isn’t the exhilarating experience that all the hype had led one to believe it would be.