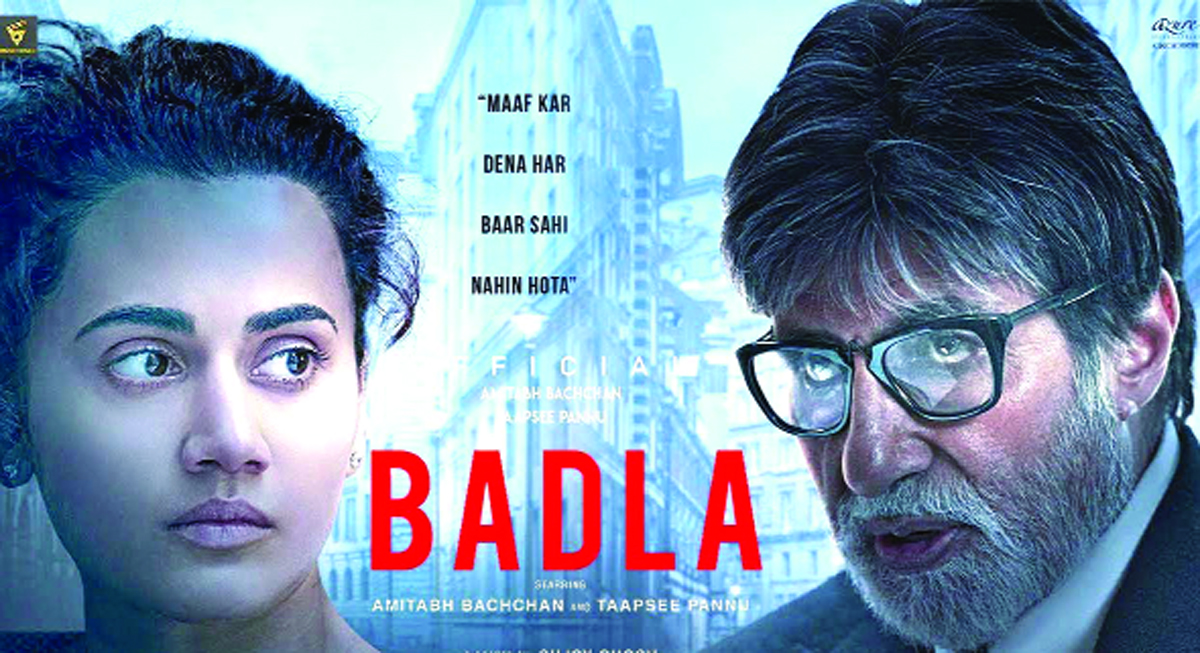 BADLA is the story of a murder accused trying to prove her innocence. Naina Sethi (Taapsee Pannu) is a successful businesswoman in London and married with a daughter. Her life turns around when she’s accused of murdering her lover, Arjun Joseph (Tony Luke). All evidences are against Naina since she was the only one in the hotel room where Arjun was killed. She claims a third person was present who carried out the murder and even hurt her on the forehead. But the preliminary investigations revealed that the room was locked from inside. Witnesses outside the room confirmed that nobody came out of the room. Naina’s lawyer Jimmy Punjabi (Manav Kaul) realises that it’s a tricky situation. Hence he hires expert defence attorney Badal Gupta (Amitabh Bachchan) to ensure she doesn’t have to go to jail. Badal reaches the residence of Naina and he begins his own investigation. Upon talking to Naina and insisting that she tell him the truth, a lot of skeletons tumble out of her closet. She reveals that the murder of Arjun has something to do with the disappearance of a young man from a small town of Aviemore named Sunny Kaur. What happens next forms the rest of the film.
Oriol Paulo’s story (also the original writer of THE INVISIBLE GUEST) is quite impressive and unlike other murder mysteries. Sujoy Ghosh’s adapted screenplay tries it’s best to do justice to the original film and its plot. A lot of scenes are well written. However the film is complicated in the middle. For a layman, it might be difficult to ascertain what’s going on. Moreover, the RASHOMON style of narrative can get a bit heavy on viewers. Sujoy Ghosh and Raj Vasant’s dialogues are sharp and witty. A few dialogues however needlessly stretch the narrative.
Sujoy Ghosh’s direction is exemplary and tries to keep the essence of THE INVISIBLE GUEST alive. There a few loose ends, which were present in the THE INVISIBLE GUEST as well. Yet his direction is such that one won’t mind since there’s so much happening in the film. Also with the shocking climax, he scores a brownie point. On the flipside, BADLA could have been shorter. THE INVISIBLE GUEST was just 106 minutes long and this one is 14 minutes longer. These extra minutes in this frame-by-frame remake are because of a few dialogues that were not needed. Moreover, Ghosh adds a crucial dialogue in the first half that is a give-away of the film’s climax and it’s surprising he did so. Also unlike KAHAANI, this film is slightly niche and this could affect its prospects.
BADLA’s opening credits are quite interesting and slick. The beginning portions of the film are a bit dragging. Too much time is wasted in Badal persuading Naina to part with the truth. It’s only when she starts talking that the interest levels increase. The best part of the first half however is Arjun meeting Rani (Amrita Singh) and Nirmal and the shock he gets in their house. The intermission point is interesting as it sets the mood for things to come. Post interval, the film remains engaging but at the same time, it also starts to drop at places. It’s only in the last 20 minutes when the tables turn is when it arrests attention. The climax is definitely a bolt from the blue as no one could have seen it coming. But it should have been executed well for a better and more mainstream impact.
Amitabh Bachchan delivers a bravura performance as always. His scenes are only with Taapsee in an enclosed room. But he does it very well and adds to the dramatic and even funny quotient. Taapsee Pannu is exceptional and the way she brings out the various shades of her character to the forefront is praiseworthy. Throughout the film, it’ll be difficult to know if she’s the victim or not and this is possible majorly through her convincing performance. Amrita Singh is natural and has a crucial part in the film. She proves yet again that she deserves to be seen more. Tony Luke has an accent but that works for his character. Performance wise, he is first rate. Manav Kaul is fine in a small role. Denzil Smith (cop) and the actors playing Sunny Kaur, Naina’s husband Sunil are okay.
BADLA is a song-less film with only the title song played during the opening credits. Clinton Cerejo’s background score is engaging and suits the mood of the film.
Avik Mukhopadhyay’s cinematography is appropriate and the outside country scenes are well captured. Kaushik Das, Subrata Barik and Paul Rowen’s production design is fine although it could have been a bit more realistic in the hotel room scene. Dipika Lal and Anirudh Singh’s costumes are spot on. Christian Tinsley and Dominie Till’s prosthetics is damn good as it plays a very important part in the film. Sham Kaushal and Alister Mazzotti’s action is real. Monisha R Baldawa’s editing is sans complaints except for few scenes in the first half and middle of second hour.
On the whole, BADLA is a smart and impressive suspense drama with the shocking climax and riveting performances being its USP. At the box office, its prospects might be limited to multiplex audience.
(https://www.bollywoodhungama.com)