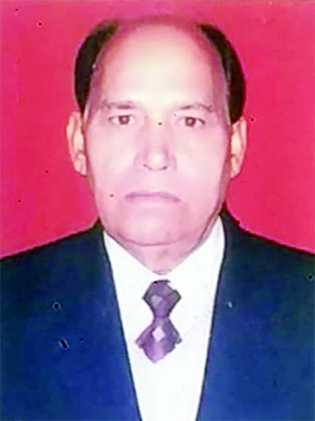 Ravi Rohmetra
‘Nand’, as he was fondly called by his relatives and friends in his childhood, was born on 13th August 1935 in a border village Rajpura in Hiranagar tehsil of Kathua district. His parents, Pt. Badri Nath Sharma, well-known Jyotishi and Bhagwat Katha Vachak and Smt. Ishri Devi of Jaffarwal town of Shakargarh tehsil of Sialkot district, groomed him.
Youngest amongst the five siblings, he passed his matriculation from Govt. High School, Hiranagar in 1953 and F. Sc from G.G.M Science College Jammu in 1956 and B.Sc. from Punjab Agriculture University, Ludhiana. Soon after that he joined the Agriculture Department in Kathua district as Plant Protection Assistant.
Married to Kamala Sharma, a teacher, in 1962, little later she joined Satyanand in Srinagar on promotion as Headmistress, where he too was transferred in the Agriculture Department. Later, he did M.Sc. Agriculture from J.N.K.V.V. Jabalpur and on return, was posted as Entomologist at R.S. Pura (HQ) Jammu and two years later, appointed as Plant Protection Officer in the Directorate of Agriculture. After reorganization of the Agriculture Department in 1982, he was shifted to the Directorate of Agriculture Jammu. He was credited to complete the work of creating records in the Plant Protection wing under the guidance of then Directors H.U Khan & Mohd. Amin. Superannuation as Jt. Director Agriculture (Inputs) on 31st August 1993 didn’t kill his zeal for work and passion for serving the people. On the contrary, it rejuvenated him.
Satyanand soon turned to social work and started serving NGOs and social organizations in various capacities. Among his notable contributions include creation of awareness in rural areas about the Govt schemes in his pursuit to the welfare of rural people and farmers under the guidance of Major General Jagdish Singh Jamwal (Retd.). In view of his work culture and passion, he was entrusted with the task of General Secretary of Consumer Welfare Association, Jammu and International Human Rights Association. Since 1994, he had been actively associated with a well-known pan India social organization called Bharat Vikas Parishad (BVP) of which he became Secretary of Gandhinagar Branch during 1994-96 and Branch President during 1996-98.
Recognizing his dedication and capability to deliver, he was elected as State General Secretary of BVP (J&K) in 2001-2003 and thereafter State President during 2003-2005. After serving in J&K, he was nominated as Zonal Secretary, Sewa of Zone -1 comprising HP & Punjab in 2005-06. He also remained National Convenor ‘PraudSanskarShivir’ during which he successfully held Shivir at Katra, Mysore, Haridwar, Gwalior and Jhansi. Since he had great zeal to work for the welfare of villages, he was nominated by the central body of BVP (India) as Chairman “Samgra Gram Vikas Yojna” in Jammu Prant in 2009.
Soon after taking over the new responsibility, he conducted an extensive tour of the villages lacking basic facilities and identified six of them which needed upgradation of basic facilities viz sanitation, clean water, clean environment, water conservation, education etc. Village Rampur-Gudwal of Samba district was taken up for development as a model village. Accordingly, the DPR was prepared and sent to Jindal Foundation Trust, Canada for approval and funding.
An Expert Committee headed by him was set up that comprised office bearers of BVP, medical, Agriculture, animal husbandry, engineers etc. for proper implementation of the project. Under his leadership, 25 individual household toilets, seven lanes in village Rampur and two lanes in village Gudwal were constructed. Moreover, a 1400 running feet long drainage system was constructed for better drainage especially during rains. Since the village was lacking community bathrooms and one old defunct pond needed rejuvenation, the same was done by constructing a community pond while the old pond was renovated with a grill, solar lighting and a 3HP submersible motor. Besides, massive plantations were undertaken periodically. Village walls were painted with common colour schemes. Health camps were also held. Children of Govt. Schools coming from poor families were provided with books and uniforms. Fruit preservation camp was also organised through Horticulture Deptt besides an Agro facility centre under one roof for the welfare of farmers. Dr. Shiv Jindal of the Trust appreciated the work done and suggested ‘President’s Award’ for it. Acknowledging his contributions in social service, S.N. Sharma was made the Chief Patron of J&K Bharat Vikas Parishad.
In recognition of his outstanding contributions, he was conferred with “Rashtriya Gaurav Award” and given a ‘Certificate of Excellence’ on 22nd Feb. 2021 by India International Friendship Society Delhi. His commitment to environment preservation, took him to educational institutions to create awareness among the staff and students about plantation. So committed to the cause of the environment that he celebrates his birthday every year with planting of ten saplings ever since he joined Bharat Vikash Parishad. So far, he has planted more than 20,000 plants. If everyone had emulated Satyanand’s passion for preservation of the environment, the green cover in Jammu would have extended far wide.