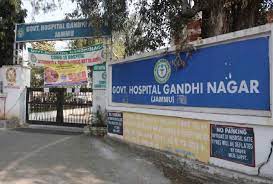 Beyond conventional and ordinary functions of the Blood Centre, Gandhi Nagar Jammu Government Hospital has been granted the often sought after permission to prepare blood components as additional products. In other words, it means a distinction of being the first District Hospital in Jammu and Kashmir to have been granted such a permission. In simpler parlance it means that the existing Blood Centre is converted into and can function as a Blood Component Laboratory. Patients in need of Red Blood Cells, Plasma, Platelets etc can get it from this Hospital instead of from GMC Jammu only. The concerned premier Medical Institutions empowered with granting such permission to the Hospital like Central Licences Approving authority, Central Drugs Standard Control Organization and the like which work directly under the Ministry of Health and Family Welfare is an indirect testimony of the fact of quite satisfactory and professional levels of expertise and infrastructure available in the said Hospital. The Hospital reportedly had sought permission for such a facility nearly more than two years ago but because of unavoidable reasons due to the COVID pandemic, it got delayed. In Jammu and Kashmir – GMC Srinagar, GMC Jammu and SKIMS Soura in Srinagar only had such a permission. Unless the permission granting authorities are fully satisfied about the handling of such a sensitive function related to issues concerning human blood, which normally is verified on the spot through inspections, such permissions are not given and it is a matter of satisfaction that the shortcomings pointed out by the inspecting teams earlier were overcome within a short period by the Hospital Administration hence subsequent inspection saw it properly through hence the permission