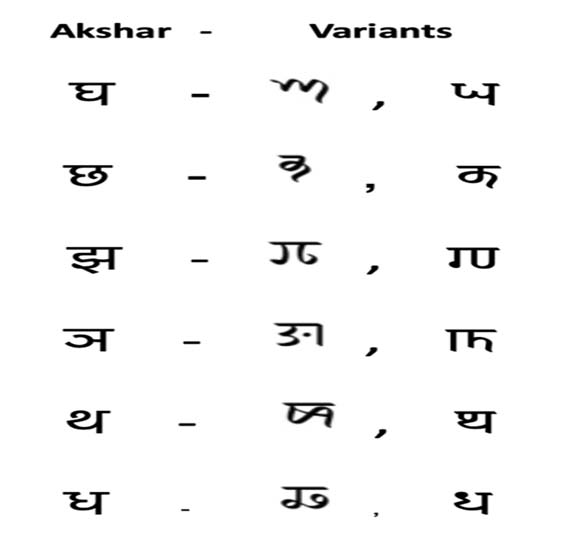 Shikha Magotra, Dr Ajay Kaul
Just as a river, when spreads over a larger wider area, forms tributaries; and as the enormous spread of knowledge in one person, formed ten heads. Similarly, Takri script with the aim to reach wide masses living in a wide North west region of India with high range of altitude variation too, naturally got diversified into 13 forms/ heads. Eventually, Takri became a class of scripts, with one of its class/ form/ head as the script of our Dogri language. Let’s dive a little deeper into the formation of the script- NamayDograAkhhar.
Sharada was the most refined and complete script, used for writing the language of Kashmir- Paradise on earth, in 13th century. The script at that time, was not only confined to the present Kashmir province but the whole North-west India which include present J&K, Himachal Pradesh, Uttarakhand and Punjab.The script Sharada remained intact for a long time because its usage was limited to the most literate men of those times only. With time, Sharada descended as Devashesha with transformation in some alphabets, to be used in the mountainous regions and Gurmukhi to be used in the plains of Punjab. But, Devashesha also called later Sharada, was confined for religious puposes only. So, to be used for writing by the common people of the states too, Devashesha was again transformed and named Takri in 16th century. The new name was given to differentiate its usage from religious men (Purohit/temple pundits) of the state who considered themselves higher from the folks. So, it is known to have originated from Sharada family of Brahmi scripts through an intermediate form – Devashesha.
Takri had simpler akshar/ alphabets formation and thus was easier to learn and remember by the common folk. But, as the region where it was used for writing was quite widely spread from present J&K to Himachal Pradesh to Uttarakhand further and was also highly mountainous, Takri could not retain single form of writing. Moreover, that time, the North-west India was divided into smaller territories, governed by petty rajas and thus, there was little communication amongst the people belonging to different territories. By the time, Takri reached each and every common man of the area, it evolved into multiple forms. So, in total, Takri has 13 forms now, each having its own alphabet but all of them share single basic orthographic structure or style of writing. The Takri translation of Bible named “MangalSamachaar” was printed in 1930 in printing press established by Britishers in Ludhiana, Punjab.
One of those 13 forms of Takri was- Ganmat/ Old Dogri alphabet, used for writing Dogri language in J&K since 16th century. Sadly, at that time, the people in J&K who were literate enough to write
it were the rich land owners of the state. So, the authority went to them and they kept the script Ganmat highly confusing and ambiguous- without using matras, using same alphabet to denote multiple phonemes. Then, in 1857, when Maharaja Ranbir Singh reign started in J&K, he noticed the exploitation of farmers by the land owners. He started working in education field. For this, he along with JyothiVishweshwar, the principal of Ranbirpathshala of that time, reframed the script Ganmat and the improvised form was named “NamayDograAkhhar”.
He declared the script- NamayDograakhhar as the official script of the state, along with Urdu. The constitution of the state (Ranbir Penal Code/ RanbirDandBidhi) and other political orders, manuscripts were printed in both NamayDograAkhharand Urdu, bilingual. Even the royal postage stamps of the state and the coins too had NamayDograAkhhar engraved on it, besides Urdu and Devanagari. The script was used for writing petitions that are read before Maharaja and for this purpose, it had replaced Urdu too. Knowledge of the script was compulsory at that time. No official not having knowledge of the script could be recruited in the state. Maharaja himself signed in NamayDograAkhhar on local official papers. A newspaper “DograMittar” was known to be published in NamayDograAkhhar in 1889 by Pt. Durga Prasad Mishra as editor.
The standardisedNamayDograAkhhar had some new character forms similar to Devanagari script like ? ,?. Despite so many efforts, it was not completely accepted by the common people of the state as some continued to use old Dogri characters- Ganmat. In the process of getting accepted by its own state, the script continued to change to meet their needs and developed a hybrid form. The hybrid form had mixed characters both from old and new script but still could find place in their hearts. Facing so many rejections in its own state of dialect, the script’s existence got short-lived, till 1960 approx.
The decline period of the script started in 1910 during the rule of Maharaja Pratap Singh, and by 1940, it had almost lost its existence and got confined to home writing only. Some of the Dogri poets wrote in the script but none of the book got published. Finally, a small tributary of the river of knowledge- Sharada, dried completely, when the state adopted Devanagari script for writing Dogri language after independence.