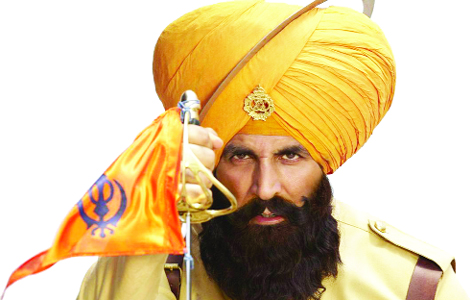 It has been one positive year in Bollywood industry when biopics and period movies vied for
attention with the genre of films popularised by B-town’s newest sensation Ayushmann Khurrana. From Manikarnika to Bala, there were movies of different tastes to entertain cine-goers this year. Supriyo Hazra looks back how the year was for every tinsel town A-lister Akshay Kumar: There is a certain formula to make movies successful and Akshay Kumar surely knows them all. His diversity as an actor could be seen specifically in 2019 when he delivered films like Kesari, which was a movie based on patriotism, and Mission Mangal, or a completely different genre of comedy with Housefull 4. He ended the year by pairing up with Kareena Kapoor Khan for Good Newwz. Overall, one can say that Akshay promised to win hearts in 2019 with all these major releases. He has already unveiled his looks from upcoming release Sooryavanshi and Laxmmi Bomb. Both of them promise to be two major bombs to be dropped by Khiladi Kumar next year. He recently announced that he has completed shooting for cop movie Sooryavanshi.
Amitabh Bachchan: Age may be slowing down the spirit of megastar Amitabh Bachchan and this became evident recently when he announced his thought of retiring from films to his fans through his personal blog. Yes, the announcement may have left millions of his fans across the globe shattered. But, they should not feel so much worried as Big B is currently busy shooting for his upcoming important projects like Brahmastra and Chehre and Gulabo Sitabo. So, it is time for us to sit back and cherish his next magical creations before that day finally arrives when he decides to hang his boots. This is also the year when he is receiving the 50th Dadasaheb Phalke Award.
Ayushmann Khurrana: If you argue that 2018 was his best then think again as Ayushmann Khurrana, Bollywood’s present poster boy, delivered it even bigger this year with three consecutive hits. The Ayushmann mania has been sweeping the Bollywood shores for the past couple of years and this time it started with the thriller Article 15. Then came Dream Girl, with its hidden soft message against the trouble of loneliness faced by people today. With his last release Bala, Ayushmann remained the hit maker of the year, creating probably a new formula for upcoming stars to follow in the coming days. Now, 2020 promises to be another Ayushmann Khurrana year when he will be seen in two major releases Gulabo Sitabo and Shubh Mangal Zyada Saavdhan. Surely, these content driven movies, which Ayushmann specialises, can once again create certain magic and evetually establish this Chandigarh-born actor as the next biggest superstar.
Aamir Khan: After a poor show in 2018 with his Thugs of Hindostan, Aamir Khan did not appear on the big screen this year. He will be seen in 2020 with the movie Laal Singh Chaddha. He has already unveiled his first look from the film. In his Sikh-man avatar, Aamir Khan once again aims to deliver a hit next year. Anushka Sharma: A controversy following a Farokh Engineer’s remarks against her might have ended the months on a sour note but Anushka and her heart-warming images with husband Virat Kohli from their various trips surely kept netizens busy across the months. However, away from her personal life, she was not seen in any Bollywood releasesin the past 12 months.
Ajay Devgn: Bollywood actor Ajay Devgn was seen romancing actress young Rakul Preet in the romantic comedy De De Pyar De early in the year. He will soon be seen in historical film Tanhaji-The Unsung next year. Ajay Devgn looks dominating in the first looks of the movie released.
Deepika Padukone: Deepika and Ranveer completed a year of togetherness in 2019 as they marked their first marriage anniversary. She might be away from the big screen in 2019 but in 2020 Deepika will come back with films like Chhapaak and 83. Both the films are crucial. In 83, Deepika is pairing up with Ranveer to play sports icon Kapil Dev’s wife Romi Bhatia’s character. Ranveer, of course, will play the character of Kapil. Away from the world of sports, Deepika will be seen playing the role of an acid attack victim in Chapaak. The Meghna Gulza directed movie is based on the life of acid attack survivor Laxmi Agarwal. One movie, patriotism and Box Office glory, Vicky Kaushal and his iconic dialogue from the movie “How is The Josh” had emerged as the next big thing Bollywood generated in this nation at the beginning of the year. The film won hearts across the country. Uri surely gave Bollywood one strong start to the year and the momentum was eventually maintained as several hit films released and shined at the Box office in 2019.

Modi and Bollywood for Gandhi: In an unprecedented event, a chunk of Bollywood fraternity gathered at Prime Minister Narendra Modi’s residence in Octber to promote Mahatma Gandhi’s ideologies on the occasion of the Father of the Nation’s 150th birth anniversary (which falls on Oct 2). In a two-minute video posted by Modi on Twitter, film personalities Aamir Khan, Alia Bhatt, Salman Khan, Kangana Ranaut, Ranbir Kapoor, Sonam Kapoor Ahuja, Vicky Kaushal and Shah Rukh Khan were seen reciting the quotable quotes of Mahatma Gandhi. Filmmaker Rajkumar Hirani, whose films were known for reintroducing Gandhi’s ideals as Gandhigiri in modern times, made the video. With hashtag #ChangeWithin, the Prime Minister said on Twitter, “The film fraternity comes together to pay tributes to Mahatma Gandhi! #ChangeWithin is an excellent effort, which will add momentum towards ensuring Gandhi Ji’s message reverberates far and wide. It will also inspire citizens to take up causes dear to Bapu.”
Special Mentions
Kartik Aaryan: He is the new sensation of Bollywood and every girl seems to be eager to go on a date with him. Well Kartik Aaryan seems to be basking in his success with a huge follow of women fans now. He recently paired with Bhumi Pednekar and Ananya Panday for Pati Patni Aur Woh, a remake of the 1978 Hindi film of the same name.
Kriti Sanon: Kriti Sanon is fast emerging as the next big thing in the industry, In 2019, Kriti worked in five mega movies. Starting the year with Luka Chuppi, Kriti went ahead and worked in movies like Arjun Patiala, Housefull 4, Panipat and Kalank. While some did well and some did not, Kriti remained one bright spot in all the films. It can be easily said that in 2020, Kriti will continue her strong form in front of the camera.
Bhumi Pednekar: Giving Kriti a strong competition in experimenting with strong roles onscreen, Bhumi worked in multiple impressive movies this year with the best ones being seen in films like Sonchiriya, Saand Ki Aankh and then yearending Bala. Bhumi’s last release of the year was the comedy movie Pati Patni Aur Woh where she appeared onscreen with Kartik Aryan to tickle the funny bones of their fans.
Yami Gautam: She is more than just a pretty face of Bollywood. Yami delivered two major hits in the year- Uri: The Surgical Strikeand then Bala.
Rajkummar Rao: Rajkummar remained a bright spot in Bollywood for the past several years. He appeared in three movies in 2019- Made in China, Judgementall Hai Kya and Ek Ladki Ko Dekha Toh Aisa Laga. (IBNS-TWF)