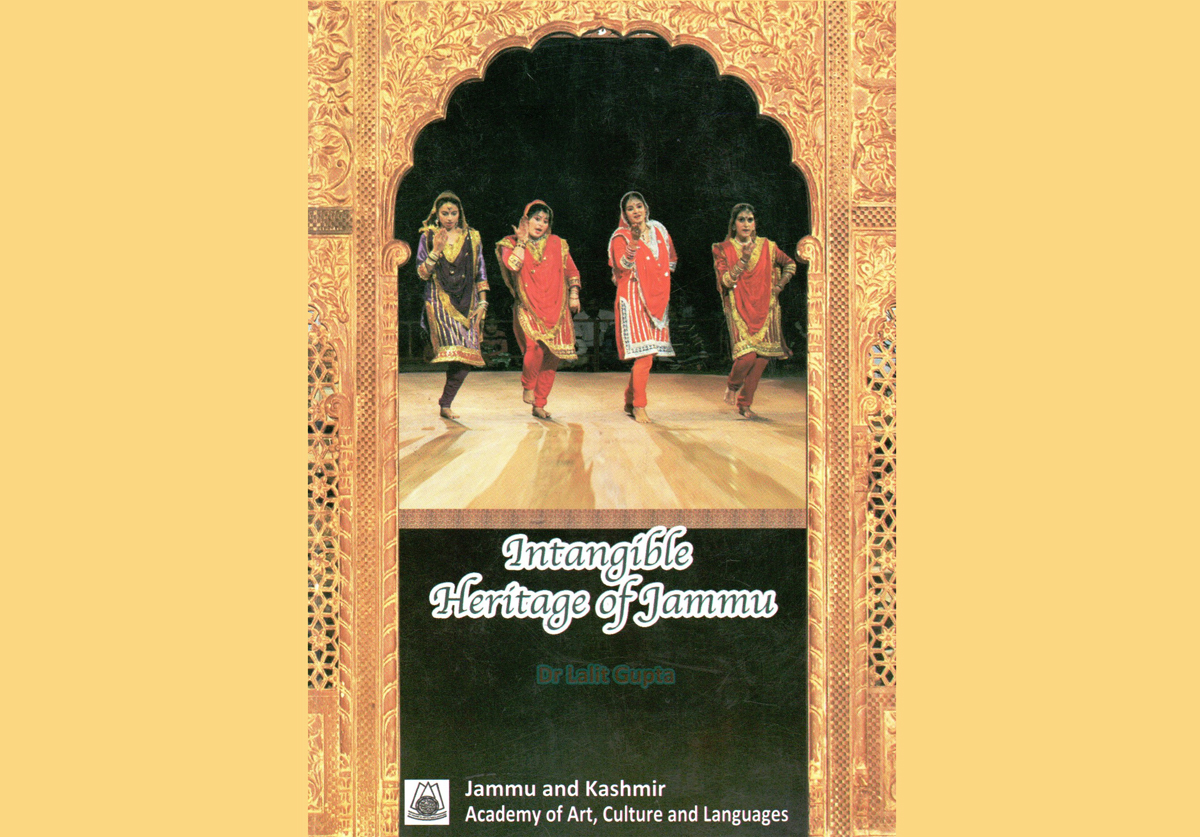 Jammu & Kashmir Academy of Art, Culture and Languages (JKAACL) has come out with a bookon the Intangible Heritage of Jammu, authored by Dr Lalit Gupta.Such a work indeed asked for a scholar who relished the aroma of the soil and knew what it meant to him and his compatriots. Happily, Dr Gupta amply meets this pre-requisite.A dyed-in-the-wool Jammu-ite, he has worn many hats – a senior instructor in the Department of Art History and Aesthetics, Institute of Music and Fine Arts, University of Jammu; Expert/Member of about a dozen committees on art, language, culture and archeology; critic, research scholar, and journalist; theatre person and cine artiste; and an accomplished writer to boot.
It is natural for a reader then to expect much of the book. Dr Aziz Hajini, former Secretary of the Academy in his Foreword asserts that it is ‘a classic by all standards’.
The workdoes not fail to prove its worth. Captured in its nineteen chapters is the effervescent soul of the province of Jammu. Myths and legends, festivals and fairs, folk rituals, dances and music, cuisines, costumes and ornaments and even oral traditions about trees – readers are taken on a guided tour of Jammu’s magnificent heritage. It is a rewarding experience. How many of us know, for instance, that the Dogra region was once called the ‘DwigartaDesh’ (the country between two hollows),alluding to the lay of the land between the lakes Sruinsar and Mansar (p.2)? Or, that prior to 1947, the Dogra rulers forbade fishing in a certain section of the Tawi at the command of a mythical entity, Pehd Devta (p.14)?
In Jammu, the prospective bride and groom have to undergo over a dozen pre-nuptial ceremonies – Thaaka, Kudmayee, the Chunni ceremony, fixing of the Tith (auspicious date for the wedding), Geet, Khulley Sagan, Ganddiyan, Saant, Chooda, adorning the would-be bride with Kalirey, the groom’s Sehrabandi, the Baraat and Lagan Beidaan, before the community acknowledges them husband and wife (pp.34-45). It is here that a peasant who has lost a buffalo may well go to a fellow villager with the hope that the latter by virtue of his siddhi of KannChattana, might help him locate hisbeastmerely by looking at the grains of rice in a thali (p.181).
In the villages of Jammu again,the deity is literally taken on a pleasure trip – sair – by his devotees in the course of which he listens to their prayers and offers relief on the spot (p.186-187). And should a menacing cloud threaten to spoil a standing crop, the localJogi is thought to have the occult power to divert it to rain elsewhere (pp. 191-192). Bhagwat Prasad Sathe, reputedly one of the founders of the modern Dogri literature, has written a much acclaimed short story ‘Kudmey da Lamha’ based on this belief of the rural folks.
Folklore apart, Jammu boasts of more than two dozen festivals and fairs that are held throughout the year, as also distinctive cuisine and costume that mark out its cultural singularity and yet align it to the rest of the country. The author has painstakingly described the rites and rituals of people following all the major religions in the land so as to give his work the much needed inclusiveness.
Each topic is described, encyclopaedia style, in about 250 words under a suitable heading. This device enables the readers to go straight to the topic of their choice rather than having to wade through the whole narrative.
Heritage, tangible or intangible, surpasses the common run of life. It was there before we were born and it is expected to be there long after we have breathed our last. It is, as the Bosnian author, Slavenka Drakulic, says so evocatively, ‘an attempt to grasp eternity’. JKAAL has done a commendable job in curating the intangible heritage of Jammu,and in a companion volume, that of Kashmir as well.
A little more care in giving the book its final shape would have indeed made it a prized possession.