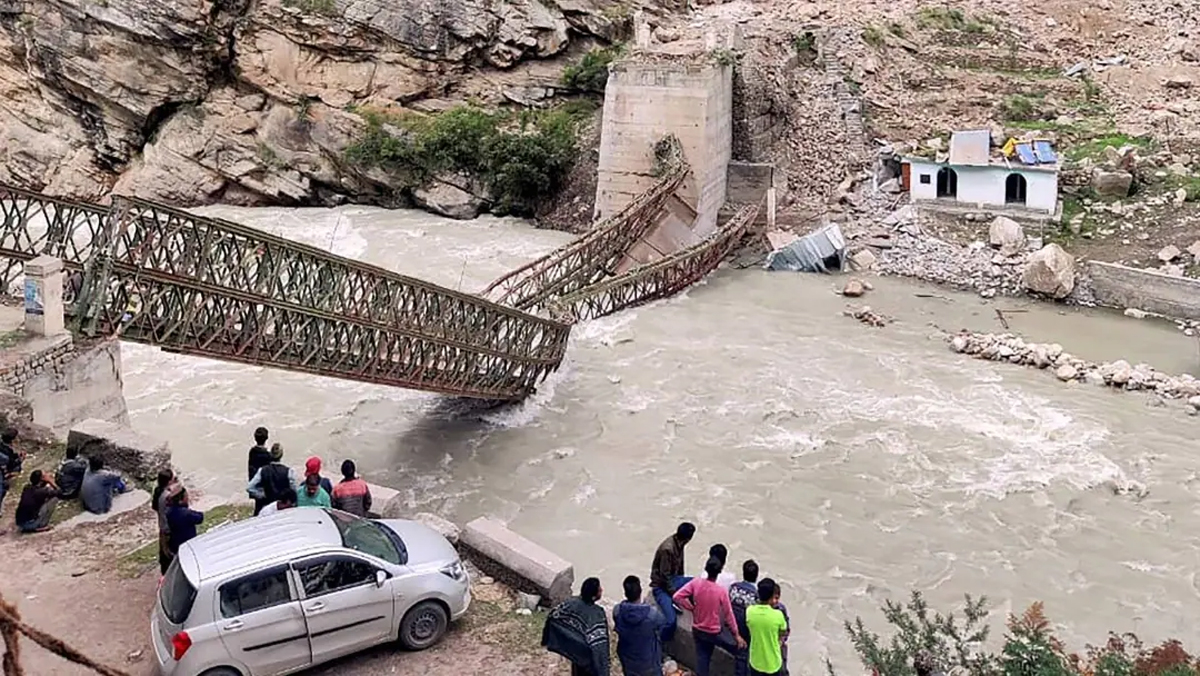 NEW DELHI, July 25:  Heavy rainfall continued to wreak havoc in several parts of the country, including Maharashtra where the death toll in rain-related incidents climbed to 113, while nine people were killed in fresh landslides in Himachal Pradesh’s Kinnaur district today.
Several parts of Kerala in south India also witnessed heavy rainfall with the MeT issuing yellow alert for several districts, including Thiruvanan-thapuram, Kollam, Pathanam-thitta, Idukki, Kottayam, Alappuzha and Ernakulam.
Meanwhile, the India Meteorological Department (IMD) issued orange and yellow alerts predicting heavy rainfall, thunderstorm and lightning in Madhya Pradesh.
Delhiites experienced a sultry Sunday with the maximum temperature settling at 37.3 degrees Celsius, three notches above the season’s average. The minimum temperature was recorded at 27.6 degrees Celsius, normal for this time of the year.
The IMD has issued yellow alert for the national capital on Monday and forecast generally cloudy sky with moderate rain/thundershowers towards the evening. An orange alert has been issued for Tuesday with the forecast of rain accompanied with gusty winds.
Parts of Uttar Pradesh and Rajasthan received light to moderate rainfall today. Agra was the hottest place in UP with the maximum temperature settling at 37 degrees Celsius.
In Rajasthan, rainfall was recorded at Pratapgarh, Jhalawar, Chittorgarh, Dungarpur and Banswara districts, with Pipalkhunt in Pratapgarh receiving the maximum of 16 cm rainfall.
Sultry weather conditions persisted in Haryana and Punjab, with maximum temperatures hovering above normal limits at most places.
Nine people were killed and three others injured in multiple landslides in Himachal Pradesh’s Kinnaur district today, police said.
Multiple landslides occurred near Batseri on Sangla-Chitkul road, they added.
Heavy boulders fell on a tempo traveller carrying 11 people, killing nine and injuring two, according to the police.
In a similar incident, one person was injured in another landslide in Kinnaur district, they added.
In rain-battered Maharashtra, the number of deaths due to flooding, landslides and other rain-related incidents reached 113 with one more casualty reported in the last 24 hours, while 100 people were missing after the monsoon fury, the state government said.
So far, 50 people have also been injured in these incidents, the Government said in a statement.
The National Disaster Response Force (NDRF) said 89 bodies have been retrieved and 34 people are missing following landslides triggered by heavy rainfall in the coastal regions of Maharashtra.
According to the official data, NDRF rescuers have retrieved a total of 89 bodies with the highest number of 47 from the worst-hit Taliye village under Mahad tehsil of Raigad.
Meanwhile, the IMD issued orange and yellow alerts predicting heavy to very heavy rainfall, thunderstorms and lightning in large parts of Madhya Pradesh, which has been experiencing intermittent downpours for the last three days.
“Both these alerts are valid till Monday morning,” IMD’s Bhopal office senior meteorologist P K Saha said.
Anuppur city in east MP received the highest 234.5 mm rainfall in the state in the last 24 hours ending 8.30 am on Sunday, he said, adding that Shamshabad area in Vidisha district of the west MP received 190.6 mm rainfall during the same period.
The ‘orange alert’ which asks authorities to be prepared for possible heavy rains and thunderstorms accompanied with lightning at isolated places, has been issued for 23 districts, namely Indore, Dhar, Alirajpur, Jhabua, Khargone, Barwani, Khandwa, Burhanpur, Ujjain, Dewas, Ratlam, Shajapur, Agar-Malwa, Mandsaur, Neemuch, Hoshangabad, Betul and Harda.
A yellow alert which advises authorities to “be updated” on the situation, warning likely heavy rains and thunderstorms accompanied with lightning at isolated places, was issued for Chhatarpur, Tikamgarh, Balaghat, Anuppur and Narsinghpur districts in the state.
In a statement, the Indian Coast Guard (ICG) said that it has rescued 215 people in districts of Maharashtra, Karnataka and Goa that have been flooded due to heavy rainfall over the past week.
The ICG’s disaster relief teams (DRTs) have reached the areas, which have been rendered unapproachable due to water inundation, especially in Chiplun and Mahad districts of Maharashtra and Umlijoog, Khargejoog, Bodjug Island and Kinnar village in Uttar Kannada district of Karnataka, it added.
Several parts of Kerala witnessed heavy rainfall on Sunday morning as predicted by the Meteorological Department.
According to the MeT department forecast, moderate to heavy rainfall was expected in Thiruvananthapuram, Kollam, Pathanamthitta, Idukki, Kottayam, Alappuzha, Ernakulam, Thrissur, Palakkad, Malappuram, Kozhikode, Wayanad, Kannur and Kasaragod districts.
A yellow alert had been issued for all these districts for Sunday.
The MeT department has also predicted strong winds in the Gulf of Mannar region, Bay of Bengal, South Andaman Sea and parts of the Arabian Sea on various days from Sunday to July 29. (PTI)