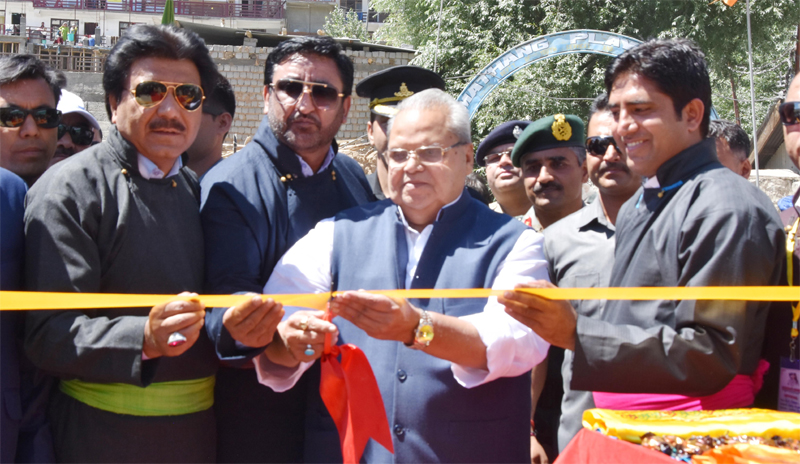 Speaking on the occasion, Governor observed that the twin districts of Kargil and Leh of Ladakh Division have huge tourism potential and emphasized on organizing more events like the Tourism Festival to promote the diverse tourism opportunities available in the region.

Governor said that the expansion work of Kargil Airport for which Rs 200 crores have already been sanctioned will be taken up soon.

This will not only provide round the year connectivity but also give a new dimension to the tourism sector in the region, he added.

Governor said that the State Administration is committed for the holistic development of Ladakh division and concrete measures are underway to pursue this goal. Government is taking strict measures to bring transparency in the system and removing various bottlenecks in the path of progress and development, he added.

Governor, on the occasion, announced the establishment of two degree colleges for Kargil district including a Women’s Degree College. He said that a 2500 MW solar power project will be starting soon to augment power sector in Kargil.

Governor also inspected and appreciated the various stalls of local handicrafts, handloom, agricultural and horticulture products, ethnic food and ancient artefacts which had been put up by various Government departments and social groups.

Sh. Feroz Ahmad Khan, Chairman and Chief Executive Councillor LAHDC, Kargil expressed his gratitude to the Governor on behalf of the people of Kargil district for having fulfilled the long pending demands of the people by granting divisional status to Ladakh, creation of 495 posts for Ladakh Division and allotment of equal number of directorates to both districts, sanctioning of Rs 200 crores for expansion of Kargil Airport and Rs 280 crores for completion of languishing projects.

The CEC also projected several demands and sought the intervention of the Governor for their early redressal including establishment of women’s police station and IRP Battalion in the district, early start of work on Zojila Tunnel and release of the pending dues of casual labourers.

Various multicultural music and dance performances were presented by the artists of the Purgi, Balti and Shina Dardi ethnic tribes and a polo exhibition match was also organized to mark the occasion.

Sh. Baseer ul Haq Choudhary, Deputy Commissioner and CEO, LAHDC, Kargil gave the vote of thanks and expressed his gratitude to Governor for gracing the occasion with his presence.