Excelsior Correspondent
NEW DELHI, Dec 12: The 7th Central Pay Commission (CPC) Report submitted last month, is under Government consideration and the follow-up on it would be done after the inputs have been received from the Union Finance Ministry and other relevant quarters.
This was stated here today by Union Minister of State (Independent Charge) for Development of North Eastern Region (DoNER), MoS PMO, Personnel, Public Grievances, Pensions, Atomic Energy and Space, Dr Jitendra Singh when a delegation of “Government Employees’ National Federation” led by its Secretary General, Sadhu Singh met him to offer their suggestions on various aspects of the Report.
The memorandum submitted by the deputation stated that while there are some positive recommendations in the 7th CPC Report, there are also, at the same time, several instances which need a relook. For example, the exercise to rationalize pay structure has led to several discrepancies. The memorandum also complained that the concept of Grade Pay and Pay Band  had been done away and all Grades of Pay at all levels had been subsumed into the pay matrix, but had also done away with the difference in Grade Pay granted earlier on promotion.
Responding to various suggestions made by the employees, Dr Jitendra Singh said, even though the opinions may vary, there is large section of employees which has hailed the Report, including its recommendation of 16% hike in salary, with 63% hike in allowances and 24% hike in pension, with minimum Basic Pay of Rs.18,000/- and maximum pay of Rs. 2.25 lakh for central government staff.
Dr Jitendra Singh recalled that, while accepting the Report, Union Finance Minister Arun Jaitley had disclosed that an Implementation Secretariat headed by Expenditure Secretary had been created while a separate empowered committee under the Cabinet Secretary will take a view on suggestions received from various stakeholders. There is, therefore, enough reason to believe that all the concerns and apprehensions, if any, expressed by the employees will be taken care of by the government, he added. 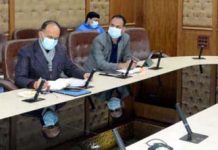