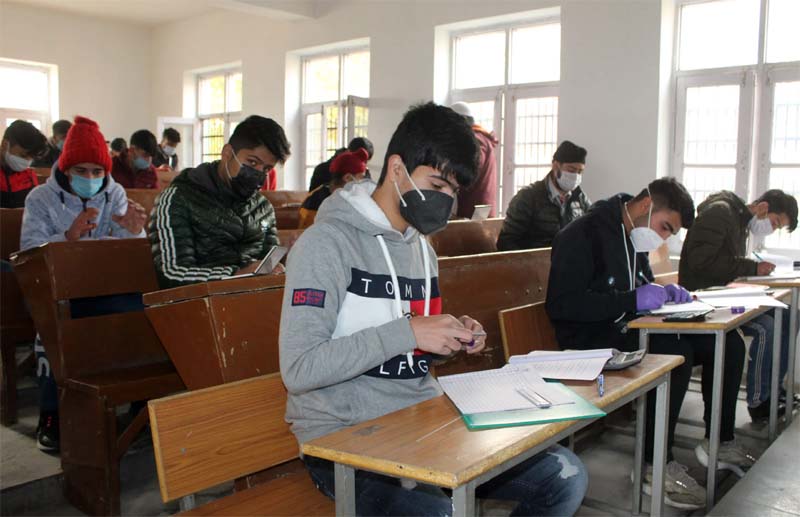 Irfan Tramboo
SRINAGAR, Apr 20: After a delay of more than 3 months, the JKBOSE today declared the results of Class-11th in Kashmir Division with 76 per cent of candidates declared successful.
As per board officials, a total of 75652 candidates appeared in the class 11th exams that were held in December last year and out of that, 57658 candidates were declared successful.
A total number of 25701 candidates were able to secure Distinction (with 75% and above marks out of 500) while as 21309, 9339 and 1294 candidates were able to secure First, Second and Third Divisions respectively in Class 11th exams held across Kashmir Division.
Also, as per figures, out of total of 75652 candidates who appeared in the examination, 16934 candidates were declared as ‘Reappear’ while as 1060 candidates have been declared as ‘Failed’.
The students said that their preparation time was quite stressful and that they had to majorly rely on the online material as the schools remained closed due to the COVID-19 pandemic.
“It was quite a stressful time as earlier, the internet was shut and then there was COVID-19 and amid such an atmosphere, we had to attend online classes, then the preparations and finally examination amid pandemic which is very new and different for us,” said a student, Musin who secured distinction.
It is to be mentioned here that the students of all the classes who were to appear in their annual exams that were held last year did so under total adherence to the COVID-19 safety protocols.
Earlier, there was a delay on part of the JKBOSE in declaring the results of Class 11th from Kashmir Division. The students, as well as parents, had also expressed their displeasure over the delay; however, the Board authorities have been stating that they were working on the results and due to the COVID situation, the process was taking time.
As per the figures made available by the JKBOSE, with regard to those who secured Distinction, a total of 2200 boys in the stream of Arts, 1106 in Commerce and 8649 in the Science stream managed to secure 75% and above marks, while as in the case of girl students, 4552 girls in the stream of Arts, 457 in Commerce and 8837 in the stream of science have managed to secure Distinction.
About those who have been declared as, ‘Reappear’, more than 9600 boys have fallen in the category, while as around 7200 girls also have been declared as ‘Reappear’
With regard to those who were declared as ‘Failed’, out of a total 75652, 690 boys were declared as ‘Failed’, while 370 girls also figured in the same category.
Notably, JKBOSE had issued the date sheet for conducting annual examinations of Class 11th in the Kashmir division in November and the exams started on December 12. The schools were beforehand advised to ensure proper sanitization of the exam centres before the commencement of these examinations.
Students appearing in the examinations were also directed to adhere to Covid-19 SOPs such as wearing face masks, ensuring proper social distancing and use of hand sanitizers.