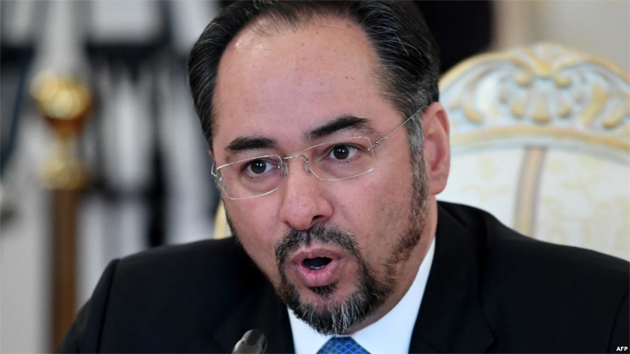 KABUL, May 8: Afghanistan Foreign Minister Salahuddin Rabbani has met new Indian envoy to the country Vinay Kumar and assured him that Afghan security forces will not spare any effort to ensure the safety and release of seven Indian engineers abducted by the Taliban gunmen in the restive northern Baghlan province.
During the meeting with the Indian ambassador yesterday, Rabbani expressed grief and sorrow over the abduction of the Indian engineers and said that the Afghan security forces will not spare any effort to protect the safety and secure the release of the Indians.
He said that efforts have been initiated through the community elders to help secure their release.
Rabbani also had a telephone conversation with External Affairs Minister Sushma Swaraj regarding the abduction of the seven Indian engineers of KEC International, an RPG group company.
Swaraj had conveyed India’s concerns about the abducted Indians and requested him for help in tracing and freeing them.
The abducted Indian engineers were working on a project for the construction of a power sub-station. They were abducted by the militants from the vicinity of Cheshma-e-Sher area on Sunday while they were going to inspect the work on the project.
An eyewitness, who wished anonymity, told Pajhwok Afghan News that he saw a number of armed men stopping a white coloured car on the Pul-i-Khumri-Mazar-i-Sharif highway.
The eyewitness did not know how many people were in the car, but said the militants took the Indian nationals to their mini bus type vehicle and sped towards areas under their control.
Many of the earlier abductions in Afghanistan have been linked to Taliban.    In 2016, 40-year-old Indian aid worker Judith D’Souza was kidnapped in Kabul. She was released after 40 days.
India has provided at least USD 2 billion aid to Afghanistan for the economic development of the war-torn nation.
Appreciating the significant role of India in reconstruction of Afghanistan and expressing his contentment of the strong bilateral relations and cooperation among the two countries, Rabbani assured the Indian ambassador that the relevant departments of the Ministry of Foreign Affairs shall extensively cooperate with him with the aim of further expanding these relations and cooperation.
Both sides discussed and exchanged views on political priorities of Afghanistan such as the peace process, elections, economic and trade cooperation between the two countries and the projects being implemented through Indian support in Afghanistan. (PTI)