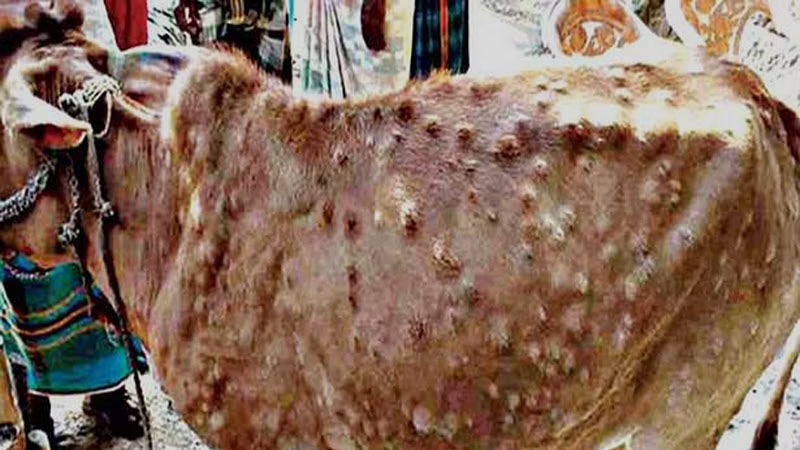 NEW DELHI, Sept 8: The Centre on Thursday said that about 57,000 cattle have died so far due to lumpy skin disease across various parts of the country and asked affected States to boost the vaccination process to control the disease.
Lumpy skin disease (LSD) is a contagious viral disease that affects cattle and causes fever, nodules on the skin and can also lead to death. The disease gets spread by mosquitoes, flies, lice, wasps, and by direct contact among the cattle, and through contaminated food and water.
The main symptoms are fever in animals, discharge from the eyes and nose, salivation from the mouth, soft blisters like nodules all over the body, reduced milk production, and difficulty in eating, which sometimes lead to the animal’s death.
“Lumpy skin disease has spread in six-seven States, including Gujarat, Rajasthan, Punjab, Haryana, and Uttar Pradesh. In Andhra Pradesh, some cases have been reported,” Union Minister for Fisheries, Animal Husbandry and Dairying Parshottam Rupala told reporters in New Delhi at a press conference to announce IDF World Day Summit being organised in India during September 12-15.
Mr. Rupala said he has visited five States to assess the situation and oversee containment operations. The Ministry is monitoring the situation daily.
The Minister asserted that ‘Goat Pox Vaccine’ is “very effective” and available, and asked State governments to speed up the vaccination process.
Mr. Rupala said the situation in Gujarat has improved, while the disease is under control in Punjab and Haryana. In Rajasthan, the disease has spread.
The Minister said there has not been any impact on milk production so far.
Mr. Rupala said the disease can be controlled with an increase in vaccination and following the protocol for controlling and containing the disease.
The Minister told States to follow the protocol of burying dead cattle.
Rajasthan most affected
Jatindra Nath Swain, Secretary, Department of Animal Husbandry and Dairying, said 57,000 cattle have died so far and out of that, around 37,000 are in Rajasthan.
He said the Centre has been regularly sending the advisories to the States.
One ml of the vaccine has been advised, which is good enough, Mr. Swain said, adding that in high-risk 3ml vaccine is being given.
Emergence of disease
LSD has recently spread in Asia following outbreaks in the Middle East and Europe. The disease emerged in Bangladesh in July 2019. India too saw the first case of LSD in the same year, 2019, in eastern States, especially West Bengal and Odisha. But this year, the disease has been reported in western and northern States as well as in Andaman Nicobar.
India, the world’s largest milk producer, had a cattle population of 192.5 million in 2019, as per the 19th Livestock census.
In a major breakthrough, two institutes of agri-research body ICAR have recently developed an indigenous vaccine for Lumpy Skin Disease in cattle, which has spread across many States in the last few months.
The Centre plans to commercialise this vaccine, developed by the two institutes of the Indian Council of Agricultural Research (ICAR) at the earliest to control the LSD.
ICAR-National Research Centre on Equines (ICAR-NRCE), Hisar (Haryana), in collaboration with ICAR-Indian Veterinary Research Institute (IVRI), Izatnagar, Uttar Pradesh, has developed a homologous live-attenuated LSD vaccine “Lumpi-ProVacInd”. (Agencies)