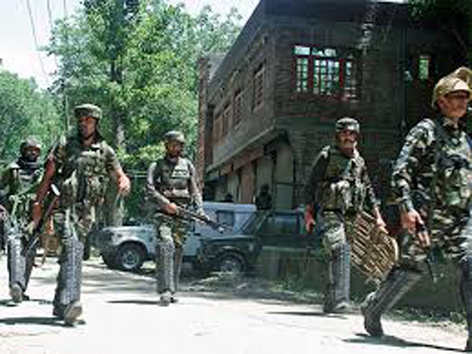 SRINAGAR, Nov 16: Security forces today arrested five Over Ground Workers (OGWs) of Hizbul Mujahideen from Sopore area of North Kashmir while Enforcement Directorate attached properties of Pakistan based commanders of the outfit in South Kashmir.
Security forces arrested five OGWs of HMfrom Sopore area of North Kashmir’s Baramulla district today after receiving specific information about their movement in the area.
Army’s 22 RR, CRPF and Sopore Police today laid a naka at Bus Stand in Sopore area of Baramulla district and arrested three OGWs – Hilal Ahmad Mir son of Mohammad Hamza Mir resident of Brat Kalan Sopore, Sahil Nazir Mir son of Nazir Ahmad Mir resident of Brat Kalan Sopore and Peerzada Mohammad Zahir son of Bashir Ahmad Shah resident of Chak Brat Sopore of Hizbul Mujahideen.
Threatening posters were recovered from their possesion by the security forces. A police official said that they were involved in threatening shopkeepers, businessmen in the area and asking them not to open their shops and operate their businesses. He said that they were wanted by police and case (FIR 266/2019 dated 16-11-2019) was registered against them and investigations are going on.
Another naka was laid by Army’s 22 RR, CRPF and Sopore Police at Bypass Crossing in Sopore area of Baramulla district and two OGWs were arrested. They have been identified as Ulfat Bashir Mir son of Bashir Ahmad Mir resident of Nowpora Jageer Sopore and Ajaz Ahmad Bhat son of Mohammad Subhan Bhat of Darpora Bomai Sopore.
Two hand grenades were recovered from them. A case (FIR 280/2019 dated 16-11-2019) was registered and investigations are going on.
In the meantime, Enforcement Directorate today attached immovable properties of two top Pakistan based commanders of Hizbul Mujahideen in Pahalgam area of South Kashmir’s Anantnag district.
A team of ED accompanied by Jammu and Kashmir Police today attached 9 kanals of land belonging to Amir Khan who is Pakistan based commander of Hizbul Mujahideen. The property was attached at Liver village in Sirgufwara area of Pahalgam.
Three kanals of land belong to Khursheed Ahmad who is also based in Pakistan was seized today in the same village. The two militant commanders are most wanted by security forces in Kashmir and they are involved in financing and launching of HM militants into Kashmir.
The ED was investigating financing of HM in which the two commanders are accused of funding militancy.