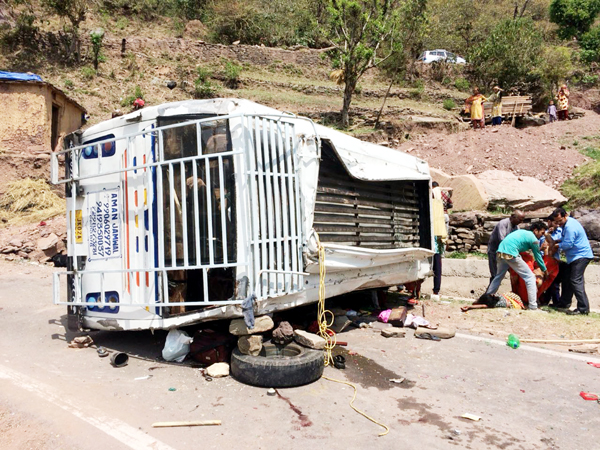 Excelsior Correspondent
JAMMU, Apr 6: Four pilgrims were killed while at least 20 others injured, some of them critically when  a mini-bus skidded off the road and rolled down near Shiv Khori shrine,  falling in district Reasi today.
Official sources said that the mishap took place at around 12.45 pm, when the mini-bus  bearing registration number, JK02AC/  8710 was on way to  Ransoo (Shiv Khori) from Katra. When the vehicle reached near Kanda,  under Taryath police jurisdiction (Kalakote), the vehicle  went out of control and rolled down from the upper  road to the lower one, before taking U-turn on the hill.
While three persons were killed on the spot, the fourth one succumbed to injuries while being shifted to GMC Hospital, Jammu.
SSP Rajouri, Yougal Manhas said that the vehicle was carrying pilgrims to Shiv Khori  shrine when the mishap took place. He said three pilgrims, all from outside the State were killed and at least 21 others injured.  Manhas said after visiting Shri Mata Vaishnodevi shrine,  these pilgrims hired a mini-bus from Katra and were moving to Shiv Khori shrine near Ransoo in district Reasi. He said one Anu Patel of UP also succumbed to injuries while being shifted to GMC Hospital, Jammu.

The dead have been identified as Ghulab Singh (45), son of  Mani Ram, resident of Faizabad in UP; Sheela Devi (44), wife of Ayodhya Nath from Faizabad (UP), Deepak Mishra (32), son of Udesh Singh of Ahmedabad and Anu Patel (17), son of  Ayodhya Parsad from Faizabad, UP.
The police said that driver of the vehicle managed to escape from the spot  and his negligence was said to be the reason behind the mishap by the accident victims. He said immediately after the mishap, the police party from Taryath and  Bharakh rushed there for rescue.  While four injured were shifted to PHC, Bharakh,  17 others were shifted to PHC Taryath. Since all the accident victims were from outside the State (UP), they all were further referred to GMC Hospital, Jammu. He said the condition of  three of them was said to be serious.
The injured were identified as Ayodhya Parsad, son of Ram Krishan from Faizabad,  Kedar Nath, son of Jamuna Parsad  from Faizabad; Lalu, son of Mathura Parsad; Durga Parsad, son of Ramesh Kumar; Amit Kumar, son of  Satish Kumar; Ramawati, wife of Manik Chand; Raj Kumar, son of Ram Krishan; Ram Dass, son of Manik Chand; Princy, daughter of   Ram Dass; Susheela Devi, wife of Satish Kumar; Reshma  Yadav, wife of Mani Ram; Sagar  Devi,  Ram Gopal, Shambu, Gudiya wife of Ram Naresh, Pragati Patel, daughter of Raj Kumar and Gudiya Mishra wife of Devi Parsad,
Meanwhile, Union Minister in PMO,  Dr Jitendera Singh who is also  concerned Member Parliament,  has expressed shock over the death of four  pilgrims  and  conveyed his condolences to the bereaved families. The Minister asked the concerned Health Minister in J&K to provide best possible health care facilities to the pilgrims hailing mostly from Uttar Pradesh.