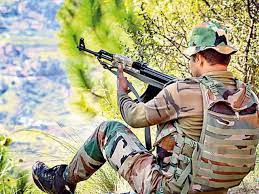 Excelsior Correspondent
JAMMU, July 19: A Lashkar-e-Toiba module has brought four of its militants to the Pir-Panjal belt of Jammu region from Kashmir, prompting the police and security agencies to send teams to hunt them down even as there were reports that two more Over Ground Workers (OGWs) have been detained for questioning in connection with ongoing investigations in terror modules.
The security forces unearthed the information that four militants from Kashmir valley have entered Pir Panjal range in twin border districts of Rajouri and Poonch while interrogating the members of the two terror modules busted by the police in Rajouri recently.
“Three to four militants have been brought to Pir Panjal belt (Rajouri-Poonch districts) from Kashmir (recently by a module). They have been kept there (in hideouts)”, the officials said expressing confidence that they will be nabbed or eliminated soon.
According to police records, only three militants are active in Jammu as most of those operating in the region have been arrested.
The security agencies have also identified three other top militants belonging to Jammu region but operating from Pakistan as Qasim, Kubair and Bashir.
The two modules busted in Rajouri were instrumental in bringing the four militants to Kashmir, the officials said.
Run by Pakistan-based LeT commander Qasim, the two modules operated in Rajouri-Reasi belts in the Pir Panjal belt during at least the last one year. They were instrumental in five militant attacks, collection of weapons dropped from drones from Pakistan in the Line of Control area and ferrying them to Kashmir.
“They were instrumental in bringing militants from Kashmir to this Pir Panjal side,” the officials said.
Talib alias Abu Ahmad Haider Shah of Draj-Kotranka was the commander for the Rajouri area and instrumental in almost all major terror activities and incidents in the Pir Panjal area over the past three years. He was arrested along with his three associates.
Qasim was monitoring the modules headed by Talib and another commander Altaf Hussain Shah to carry out terror attacks on security forces, minority communities and prominent political figures in the area.
Talib and his associates have been found to be involved in five criminal and terrorism cases.
There were reports that two more Over Ground Workers of the militants have been picked up during ongoing operations against the militants by the police in different districts. However, there was no official confirmation of the report.
As per the officials, the militants had shifted to Pir Panjal range from the Kashmir valley to coordinate militant activities with local OGWs and step up targeted killings and other terror acts in the twin border districts of Rajouri and Poonch.
Security forces and police are trying to eliminate or nab them well before they could indulge in any terror activities for which they had come here. Besides, the militants from Kashmir were also trying to recruit youth into the militancy to intensify terror activities in Rajouri and Poonch districts.
It may be mentioned here that police have busted three modules of Lashkar-e-Toiba (LeT) including one in Jammu and two in Rajouri and arrested seven LeT operatives who were involved in a series of terror activities. Large quantity of arms, ammunition and explosives were recovered from them.