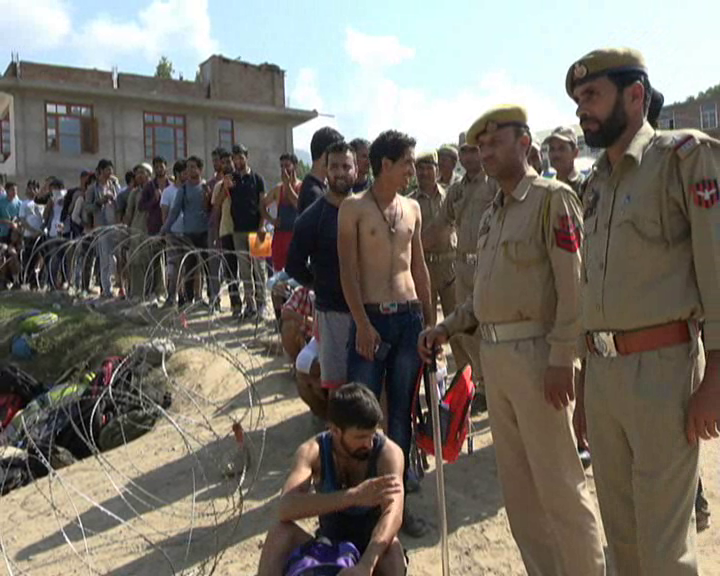 Avtar Bhat
JAMMU, Sept 25: Notwithstanding the abrogation of Article 35 -A from the State and claims of Union Government that West Pak refugees and Valmiki Samaj who over the 70 years were deprived of citizenship rights will be entitled to State Government jobs under the new arrangement, the worries and pain of these hapless people have not still ended as J&K Police in its recent recruitment notification has kept the State Subject as main criteria thereby debarring them from applying for the posts of constables and SPOs.
The decision of the Police Department has generated a lot of resentment among the West Pak refugees and Valmiki Samaj who termed it a “great injustice” with them. The people belonging to these communities said this shows that nothing has changed for them with the abrogation of Article 35 -A as the authorities at the helm of affairs have closed the doors for the recruitment of their wards in police in which the Government has decided recruitment of 8500 posts of different ranks which included SIs, lady constables, constables and SPOs.
However, to the dismay of West Pak refugees and Valmiki Samaj, they have been debarred from applying for these posts as permanent residents of the State has been kept as criteria in recruitment notifications.
The people belonging to these two categories who were the main sufferers of Article 35-A were fighting for their permanent citizenship rights for over last seven decades with the hope that they will get justice some day. But under the prevailing circumstances it appears that Justice still eluded them. Debarring these hapless people from applying in police recruitment has happened despite the fact that Article 35-A ceases to be in vogue in the State after the Presidential order of August 5.
Sources in Police Department said the recruitment for two women battalions, one each from Jammu and Kashmir regions will entertain only ‘permanent residents’ of the State and any candidate furnishing wrong information will attract legal action.
On the directions of Director General Police, Dilbag Singh, the dates for submitting of forms have been extended to October 23, in the wake of non availability of the Internet services in the State, sources said. The forms for the posts have been made available at the district level from September 23 and the candidates can now file forms physically at the police’s district headquarters. Earlier, the forms were only available online, sources added.
It may be recalled that Union Home Minister, Amit Shah who was instrumental in abrogation of Articles 370 and 35-A from the State for its total merger with Indian Union during a recent seminar at Goregaon, Mumbai said West Pak refugees had no right in entire J&K while “we had two Prime Ministers and one Deputy PM among West Pak refugees who were settled outside J&K.” The refugees now ask what happened to this claim of the Union Home Minister.
Taking serious note of the Police Department’s recruitment notification, West Pak refugees president, Labha Ram Gandhi rushed to New Delhi yesterday and is camping in the Union Capital to take up the issue with the Ministry there.
Talking to Excelsior, Gandhi said that he will not allow his youth to be deprived of the recruitment opportunities in the police and other Government departments as the West Pak refugees have suffered a lot in last seven decades. “A ray of hope had emerged for us after the abrogation of Article 35-A and if the Government continues to impose restrictions on our recruitment by invoking permanent residents criteria in the notifications then what was the fun of abrogation of Article 35-A and 370.” This way the Presidential order of August 5 had no meaning for us”, he added.
He said “our youth are in great distress and feel disappointed for last some days after they could not fill up the forms and this forced me to rush to the Union Capital”.
Gandhi said he is meeting Joint Secretary, Home Ministry, in charge Kashmir Affairs Gyanesh Kumar tomorrow and will bring the entire issue in his notice seeking GoI’s immediate intervention in the matter.
He said besides he will also try to meet Union Minister in PMO, Dr Jitendra Singh and take up the matter with him.
It may be recalled that the vacancies were announced by the Home Ministry in March this year. Sixty percent recruitments were kept for border districts of Baramulla, Kupwara, Bandipora, Jammu , Samba, Kathua , Rajouri and Poonch while 40 percent was for other districts.