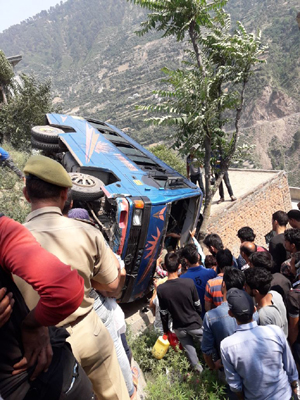 DODA, June 7: Thirty three persons were injured, when the overloaded mini-bus they were travelling in, skidded off the road and plunged into gorge, here today.
The ill-fated vehicle bearing registration number JK06-1340 was on its way to Assar from Doda, when the driver lost control over the vehicle and it fell down into gorge near petrol pump in Doda town, resulting into injuries to 33 passengers.
After getting information, police team rushed to the spot and started rescue operation with the help of locals. Click here to watch video
All the injured persons were shifted to District Hospital in police and other vehicles, from where three injured persons were referred to Government Medical College and Hospital, Jammu for advanced treatment.
The injured have been identified as Tanya Bali (17), daughter of Bansi Lal, a resident of Mothi Marmat, Imran Ahmed (20), son of Bashir Ahmed of Behalla, Fozia (5), daughter of Rafi Mohammad of Doda, Pawan Kumar (40), son of Suram Chand of Hud, Babita Devi (30), wife of Pawan Kumar of Hud, Ishan (3), son of Pawan Kumar of Hud, Sukshan (2), son of Pawan Kumar of Hud, Anu Devi (30), wife of Jagdish Raj pf Khellani, Krina Devi (45), wife of Bodh Raj of Khellani, Ram Raj (50), son of Dawan Chand of Barshalla, Priya Devi (20), daughter of Angraz Singh of Masroo, Suchita Thakur (23), wife of Vipan Kumar of Khellani, Bar Devi (67), wife of Brij Lal of Ranka, Amerik Singh (53), son of Dina Nath of Khellani, Rekha Devi (27), wife of Bodh Raj of Paryote, Raj Hussain (44), son of Mohammad Asadullah of Batote, Naseer Ahmed (35), son of Ghulam Mohammad of Sazan, Amar Devi (55), wife of Suram Chand of Jangalwar, Suram Chand (70), son of Neel Khant of Jangalwar, Jaffer Malik (23), son of Ghulam Mohi-ud-Din of Kishtwar, Hushyar Singh (48), son of Badh Dass of Khellani, Ashok Kumar (20), son of Hari Ram of Shiva Jathali, Sarish Banoo (8), daughter of Mohammad Rafi of Doda, Davinder Kumar (45), son of Fakir Chand of Chanas, Brij Lal (70), son of Chure Singh of Ranka, Saleem Jaffer (30), son of Rehmatullah Ganai of Batyas, Javeed Iqbal (33), son of Mohammad Ramzan of Assar, Aman Ullah Wani (22), son of Bashir Ahmed of Khellani, Zatoona Begum (26), wife of Noor Ahmed of Khellani, Anil Singh (22), son of Rumail Singh of Kastigarh, Ajay Kumar (19), son of Phalal Singh of Moti Marmat and Akshay Kumar (21), son of Jai Singh of Dhara.
A case under relevant Sections has been registered at Doda Police Station and investigation started to ascertain the exact cause of the accident.
Meanwhile, due to accidents on mountainous roads in the past, the overloading still goes unabated. The example of this is today’s accident, in which 33 passengers received injuries.
While talking to the EXCELSIOR, some of the injured persons stated that the driver was driving the mini-bus in a negligent manner.
“We asked him several times to control the speed, but he did not pay any heed to our requests and later with driver’s negligence, the mini-bus plunged into gorge and we landed in hospital”, they added.
However, some of the witnesses said the accident took place due to negligent driving by the driver.
“There was miraculous escape for the passengers traveling in the vehicle as mini-bus got stuck with tree after falling into gorge”, they added.