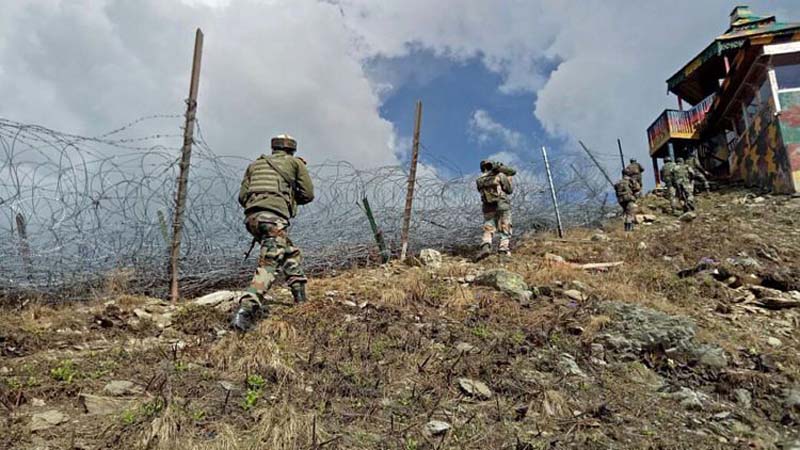 Excelsior Correspondent
JAMMU, June 1: Three heavily-armed Pakistani militants were killed as the Army scuttled a major infiltration bid along the Line of Control (LoC) in Nowshera sector of Rajouri district today. Troops recovered large quantity of arms, ammunition, explosives, eatables, medicines and other items from the site of encounter.
Official sources told the Excelsior that movement of the militants was first spotted on the intervening night of May 28 and 29 as one out of six militants trying to infiltrate from village Kabootar Gala in Kalal area of Nowshera sector stepped over an Anti-Personnel Mine (APM) leading to an explosion in the area.

Click here to watch video
Since then the troops had repeatedly engaged the militants along LoC resulting into fierce gunfight on two to three occasions. However, as the firing from the militants’ side stopped this morning, the security personnel conducted searches and detected three bodies of militants lying on the LoC.
Large quantity of arms, ammunition, explosives and eatables were also lying near bodies of the militants.
“While three militants had been killed in retaliatory firing by the Army, three others might have managed to escape back to Pakistan” occupied Kashmir (PoK), sources said adding that there were no casualties on the Indian side in firing and lobbying of grenades by the militants.
They said bodies of all the three militants were found by the search parties this morning but could not be retrieved due to close proximity of the enemy posts and the lurking threat of firing during any attempt to recover them. On couple of occasions, Pakistan army opened firing and lobbed mortar shells when the Indian troops tried to retrieve bodies to their side.
However, the Army personnel managed to recover consignment of arms, ammunition, explosives and eatables brought by the militants with them from PoK, from the spot.
Recoveries included two AK rifles with 13 filled magazines, a US-made M-16A2 rifle with six filled magazines, a 9-MM Chinese pistol, an Under Barrel Grenade Launcher (UBGL) with six grenades, five hand grenades and two knives.
In addition, they said, a large quantity of food items, medicines and Rs 17,000 in Indian currency was recovered from the rucksacks which were abandoned by the three militants while trying to flee back in the face of the heavy firing by the Indian Army.
The area is still under domination and operations are in progress, the officials said.
Meanwhile, the Pakistan army resorted to heavy shelling along the Line of Control (LoC) in Poonch district today, prompting a befitting reply from the Indian side, officials said.
The Pakistani troopers carried out attacks on forward posts with guided missiles, they added.
“At about 2030 hours today, the Pakistan army initiated unprovoked ceasefire violation by firing with small arms and intense shelling with mortars along the LoC in Mankote sector of Poonch district,” a defence spokesman said.
The Indian Army retaliated befittingly, he added.
Pakistan yesterday carried out heavy shelling in four sectors in Poonch and Rajouri districts, in which Mohammad Yasir, a resident of Gohlad, received splinter injuries when a mortar shell exploded near his house.
Due to the overnight shelling, panic-stricken people in border areas spent the whole night in bunkers and other safe places, sources said.