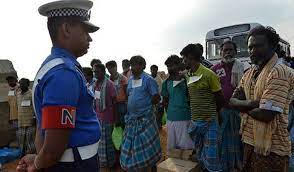 COLOMBO, Nov 29: The Sri Lankan Navy has arrested 24 Indian fishermen and seized their five trawlers for allegedly poaching in the country’s territorial waters, an official statement said on Tuesday.
The fishermen were arrested on Monday evening in a joint operation by the Navy and the Sri Lanka Coast Guard off the coast of Karainagar in the northern Jaffna peninsula, the statement said.
They were later brought to the Kankesanthurai harbour and handed over to the fishing inspectorate for further action, the Navy added.
The Navy said that a total of 252 Indian fishermen have been arrested so far this year for poaching in Sri Lankan waters.
The fishermen issue is a contentious one in the ties between India and Sri Lanka, with the Lankan Navy personnel even firing at Indian fishermen in the Palk Strait and seizing their boats in several alleged incidents of illegally entering Sri Lankan’s territorial waters.
The Palk Strait, which is a narrow strip of water separating Tamil Nadu from Sri Lanka, is a rich fishing ground for fishermen from both countries. There have been periodic instances of Indian fishermen being apprehended by Sri Lankan authorities for allegedly crossing the International Maritime Boundary Line and fishing in Sri Lankan waters.
Tamil Nadu Chief Minister M K Stalin on Monday apprised the Centre and sought action to secure the release of fishers and their boats from the neighbouring country.
Writing to External Affairs Minister S Jaishankar, Stalin said: “In this year alone, 221 Tamil Nadu fishermen were apprehended by Sri Lankan Navy.
“The repeated instances of arrests by the Sri Lankan navy are causing severe stress and anguish among the fishermen community in Tamil Nadu who are solely dependent on fishing. The fragile coastal economy is facing a crisis and it needs our support,” he said.
As of now, 105 fishing boats of Tamil Nadu are under Sri Lankan custody. The fishermen, apprehended in previous instances, were released by Lanka due to continuous efforts of the government, Stalin said.
However, their fishing boats still remained under Sri Lankan custody. “I, therefore, request you to take necessary diplomatic initiatives to restrain the Sri Lankan Navy from apprehending our fishermen and also enable the early release of all the fishermen and their fishing boats now under Sri Lankan custody,” the Chief Minister urged the External Affairs Minister. (PTI)