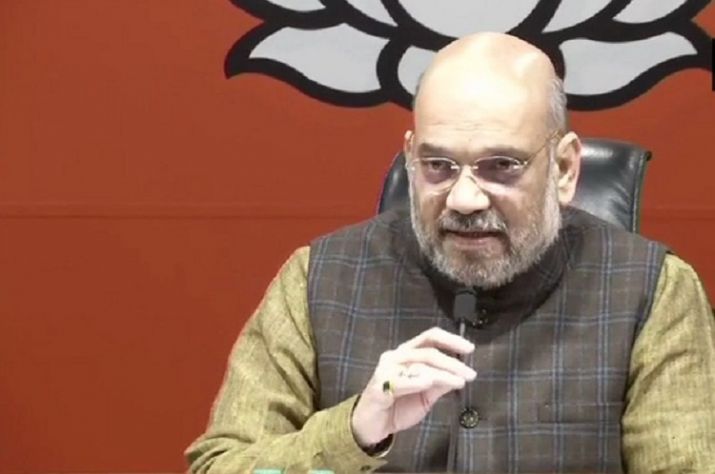 NEW DELHI, Dec 23: BJP President Amit Shah said on Sunday that upcoming 2019 Lok Sabha polls would end the politics of caste, creed, appeasement and favoritism and would prove to be last nail in the coffin of those indulging in such politics.
Addressing the booth level party workers and leaders in Delhi, Mr Shah said that there were countless reasons to vote Prime Minister Narendra Modi to power again. He said, the BJP’s victory in 2019 polls would ensure that the country’s politics was free from these negative practices in politics.
Mr Shah said, in Delhi, the contest would be mainly between three major players – BJP, AAP and Congress. He alleged that till date, AAP chief Arvind Kejriwal and Congress Chief Rahul Gandhi spoke the highest number of lies in the history of politics.
Hitting out at Congress over the 1984 riots, Mr Shah asked why did such delay happen in delivering justice to the families of the riot victims. He alleged that the riots took place under the patronage of Congress.
He said when BJP Government came to power it formed Special Investigation Team (SIT) in the anti-Sikh riots cases which led to speedy probe and now justice was being delivered to the victims.
After coming to power, BJP Government announced 5 lakh compensation, formation of SIT and benefits for the riot victims.
Referring to Delhi Assembly resolution over the anti-Sikh riots, Mr Shah said it was like rubbing salt to the wounds of the Sikh community, and AAP should be ashamed of what they did. He said the AAP Government in Delhi failed to deliver what they promised during elections and the long list of the promises has a list of their failures.
The people in Delhi are drinking dirty water, he said adding that promises of CCTV cameras and marshals in DTC buses, and opening of 500 schools by AAP remained unfulfilled.
He said Delhi citizens were suffering because of failure of AAP Government but Mr Kejriwal is not ready to accept the same. Hitting out at the Mohalla clinics, Mr Shah said that instead of opening hospitals, AAP Government opened mohalla clinics, most of which were without doctors, pharmacists and basic facilities.
Mr Shah said, the surgical strike had put India into the big league of the US and Israel that were known for hitting back at enemies that attack their security forces.
He said Supreme court has nailed the Congress’ lies regarding Rafale deal by giving clean chit to government over the fighter jet purchase contract. (UNI)