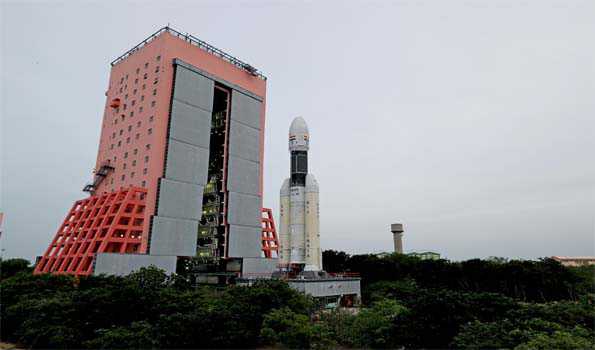 CHENNAI: The 20-hour countdown for the launch of the prestigious second lunar mission, Chandrayaan-2, will commence at the spaceport of Sriharikota on Sunday morning. The countdown would start at 0651 hrs on Sunday morning, according to ISRO Chairman Dr K Sivan. Stating that the launch preparations were progressing smoothly, he said all the checks were being carried out and GSLV-Mk-III, India’s heaviest rocket, would lift off from the Second Launch Pad at 0251 hrs on Monday. During the countdown, propellant filling operations would be carried in the 44 metre tall three-stage vehicle, which uses the cryogenic engine in the third stage.
This mission will help ISRO gain a better understanding of the origin and evolution of the Moon by conducting detailed topographical studies, comprehensive mineralogical analyses, and a host of other experiments on the lunar surface. It would also explore discoveries made by Chandrayaan 1, such as the presence of water molecules on the Moon and new rock types with unique chemical composition. Through this mission, ISRO aims to expand India’s footprint in space, inspire a future generation of scientists, engineers and explorers and surpass international aspirations. About 16 minutes after lift off, Chandrayaan-2 will be injected into an earth parking 170 x 40,400 km orbit. A series of maneuvers will be carried out to raise its orbit and put Chandrayaan-2 on Lunar Transfer Trajectory.
On entering Moon’s sphere of influence, on-board thrusters will slow down the spacecraft for Lunar Capture. The Orbit of Chandrayaan-2 around the moon will be circularized to 100×100 km orbit through a series of orbital maneuvers. On the day of landing, the lander will separate from the Orbiter and then perform a series of complex maneuvers comprising of rough braking and fine braking.
Imaging of the landing site region prior to landing will be done for finding safe and hazard-free zones.
The lander-Vikram will finally land near South Pole of the moon on September six and subsequently, Rover will roll out and carry out experiments on Lunar surface for a period of one Lunar day which is equal to 14 Earth days.
The Orbiter will continue its mission for a duration of one year. Chandrayaan-2 has several science payloads to expand the lunar scientific knowledge through detailed study of topography, seismography, mineral identification and distribution, surface chemical composition, thermo-physical characteristics of top soil and composition of the tenuous lunar atmosphere, leading to a new understanding of the origin and evolution of the Moon. The Orbiter payloads will conduct remote-sensing observations from a 100 km, orbit while the Lander and Rover payloads will perform in-situ measurements near the landing site.