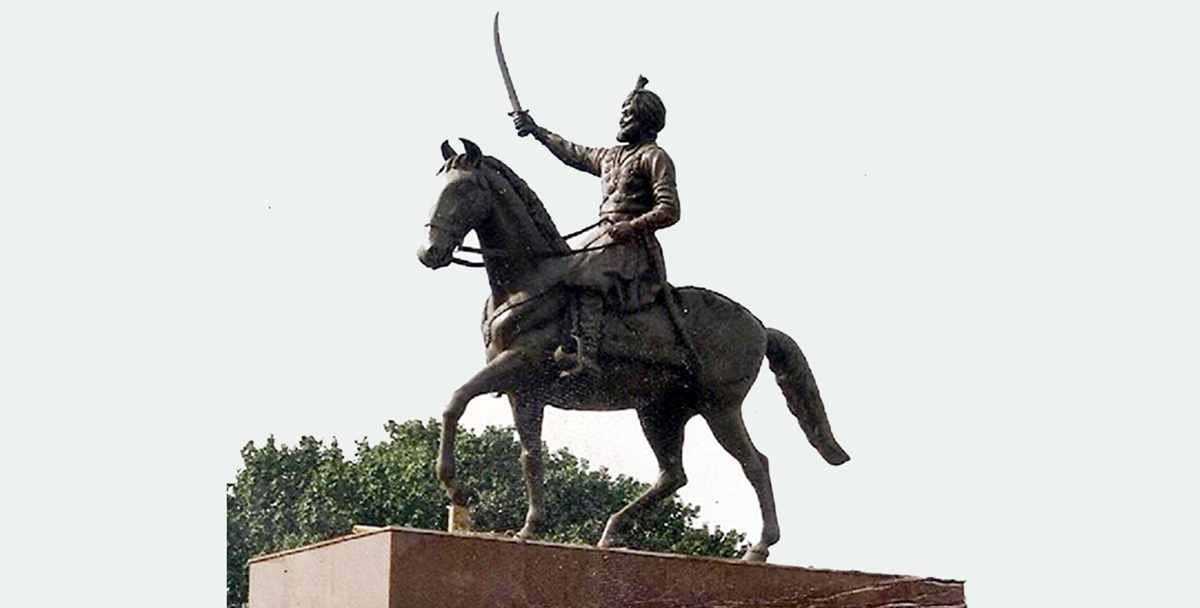 Avtar Bhat
KATHUA, Mar 10: Creating a history of sorts, the BJP led Lakhanpur Municipal Committee is installing a 20 feet long statue of Maharaja Gulab Singh -the founder of erstwhile J&K State at Lakhanpur , the gateway of Jammu and Kashmir.
The 20 feet long bronze statue costing Rs 75 lakh has been made by Padamshri Ravinder Jamwal, a renowned sculptor of J&K who has been working on it for last three years. The installation of 20 feet in height bronze statue with Maharaja astride on a horse which will be placed on 20 feet high pedestal tonight will be the greatest tribute to this great ruler and warrior of J&K on the bi-centenary coronation year of Maharaja Gulab Singh.
The statue will be an attraction for millions of visitors, besides the pilgrims of Mata Vaishno Devi and Shri Amarnath Ji entering J&K from Lakhanpur after crossing the Ravi bridge. A special welding team has been called to put the statue on pedestal.
The total cost incurred on the installation of statue with pedestal, a park, a selfi point and lighting arrangements has been estimated at Rs 1.50 crore, said Ravinder Sharma president Municipal Committee, Lakhanpur. The statue will be installed at the entry point of J&K from Punjab near Excise building in Lakhanpur.
A short life history of Maharaja and his achievements will also be engraved on a stone. Besides, a 35 feet high National Flag will also be hoisted near the statue, he added. The foundation of the Pedestal for installation of statue was laid by Ravinder Sharma president Municipality Lakhanpur along with Raghunandan Singh Babloo, Vice Chairman, DDC Kathua on November 29 last year.
Union Minister, Dr Jitendra Singh who represents the Kathua -Udhampur -Doda constituency will unveil the statue. However, the date for the same is yet to be decided. Sharma said that the statue installation will be completed within one week’s time but other connecting works will be completed in two months. He said Rs 75 lakh for the making of statue were paid by the Municipal Committee Lakhanpur.
Sharma said it was the earnest desire of Dr Jitendra Singh that a statue of Maharaja as a founder of J&K be installed at Lakhanpur, the gateway of J&K and he provided all logistic support for the same.
Ravinder Jamwal sculptor, who has made almost all statues in J&K and Ladakh said it was the objective of his life to install the statue of Maharaja Gulab Singh in Jammu befitting his personality. He said there are statues of other Dogra rulers but not a giant statue of Maharaja Gulab Singh who was the founder of Dogra rule in J&K as well as founder of undivided State of Jammu and Kashmir.
Jamwal said he has been working on the making of statue of Maharaja for last three years and his work got delayed to some extent due to Corona. He said the casting of the statue will be done by a team from Delhi and the electric welding will also be done by the experts.
Earlier, Jamwal has installed the 10 feet long statue of Col. Rinchan at Leh in Ladakh, Mahatma Gandhi, Maharaja Hari Singh, the last Dogra ruler and Mian Dedo in different areas of J&K besides of Brig Rajinder Singh in Army area at Uri in North Kashmir.
He said there is no where such a big statue of any great personality or Maharaja astride on horse in Punjab, Himachal Pradesh and J&K or Ladakh and the statue of Maharaja Gulab Singh at Lakhanpur will be first of its kind.
He said a 10 to 12 feet statue of Mehar Chand Mahajan, Prime Minister of Maharaja Hari Singh will also be installed by him at High Court Chowk in Janipur, Jammu while one statue of former J&K BJP president, Thakur Baldev Singh will be installed at Hiranagar in Kathua.
Dr Jitendra Singh said it was decided to install the statue of Maharaja at Lakhanpur this year, as 2022 is marking the bi- century coronation of Maharaja Gulab Singh who was coroneted by Maharaja Ranjit Singh the then ruler of North Indian Sub continent in 1818 at Jammu. He said the credit goes to organisation which had an earnest desire of giving due respect to Dogra rulers of Jammu whose sacrifices and services were totally neglected by the successive rulers in last over six decades.