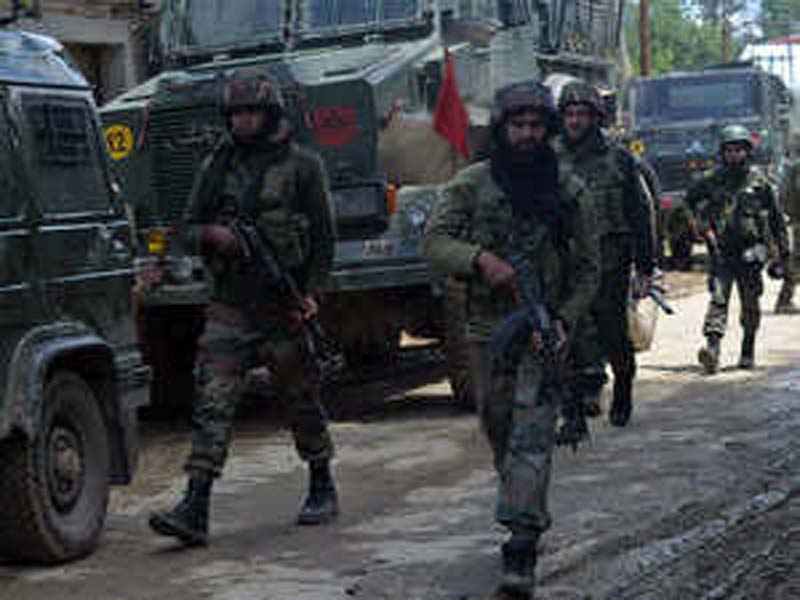 Fayaz Bukhari
Srinagar, June 7: Four Jaish-e-Mohammad militants including two SOG personnel, who deserted police along with their service rifle from District Police Lines (DPL) yesterday, were killed in an overnight gun battle at Panjran area in South Kashmir’s Pulwama district.
A joint team of 44 RR, SOG and CRPF cordoned off Panjran area of Lassipora on Thursday afternoon after inputs about presence of militants. As the troops were conducting searches, the hiding militants opened fire, triggering a gun battle, which continued throughout the night and ended this morning.
Troops today blasted the house where the militants were holed up and razed it to the ground. Two houses- both belonging to two brothers Mohammad Yasin and Ghulam Mohammad Ganai were damaged completely.
Four militants were killed in the encounter. Among the slain, two were listed militants while as two others Mohammad Salman Khan of Uthmulla Shopian and Shabir Ahmad Dar of Tujan Pulwama were SPOs who had deserted police yesterday morning and joined Jaish-e-Mohammad.
These SPOs were engaged in December 2016 and were due to be inducted in police as constables at the end of this year. They were working in DPL Pulwama and had only last month joined the SOG in Pulwama.
Police identified the other slain militants as Ashiq Hussain Ganaie of Panjran, Pulwama and Imran Ahmad Bhat of Arihal, Pulwama.
“According to the police records, Ashiq Hussain had a history of militant-related crimes and was part of a group involved in planning and executing a series of militant attacks in the area,” a police spokesman said.
“Similarly, Imran Bhat was also involved in several militant attacks on security establishments in the area, he said. Many crime cases have been registered against the duo”, the spokesman said.
The bodies were handed over to their respective families for last rites. Thousands of people attended the funeral prayers of all the slain militants at their respective native places.
At Tujan, a group of militants appeared and fired aerial gunshots as a mark of gun salute to their fallen associate Shabir Ahmad Dar.
The stone pelting clashes also erupted near the encounter site and other places adjacent to it including main town Pulwama. Security forces deployed in the area used tear smoke shells and pellets to disperse them.
In wake of the encounter, the mobile internet services remained suspended since Thursday evening in the southern district.
The houses that were raised to rubble during the encounter were constructed recently and one of brothers-Ghulam Mohammad-had shifted there only on Eid-ul-Fitr, a day before encounter.
The militants after an initial gun battle took shelter in the houses of Mohammad Yasin Ganie, an employee in the Telecom department.
Mohammad Yasin whose house was also damaged had shifted in his newly constructed a few months back.
And two policemen were injured after militants hurled a grenade on Police Station Sopore in North Kashmir’s Baramulla district this afternoon.
Militants attacked Police Station with a grenade in which two cops Abdul Aziz and Ali Mohammad suffered splinter injuries and were immediately shifted to SDH Sopore for treatment.
Meanwhile, Army today paid floral tributes to Havildar Manzoor Ahmad Beigh, who was killed by militants in Anantnag district while he was on leave, officials said.
Chinar Corps Commander Lt Gen K J S Dhillon paid homage to the soldier at Badamibagh Cantonment here, an Army spokesperson said.
He said representatives from other security agencies also joined in to pay their last respects to him.
Forty-one-year-old Beigh, serving with the Territorial Army, was shot at and grievously injured by militants at his residence on Thursday. He was rushed to a hospital where he succumbed to injuries.