Excelsior Correspondent
POONCH, July 21: Two persons were injured in a road accident near Poonch town here today.
A police spokesman said that two persons who had gone for evening walk to the Sher-e-Kashmir bridge side and walking along the road were hit by a speeding car. While the vehicle driver sped away, both the accident victims were helped by the locals of the area. The police also reached the spot and shifted them to District Hospital, Poonch.
They were later referred to GMC Hospital, Jammu, The victims were identified as Rajesh Kumar (55), son of Bansi Lal and Avneesh Kumar (54), son of Dwarka Nath, both residents of Ward No. 4, Poonch City. The police has registered a case in this connection. 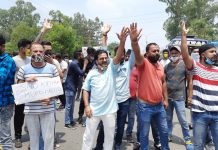