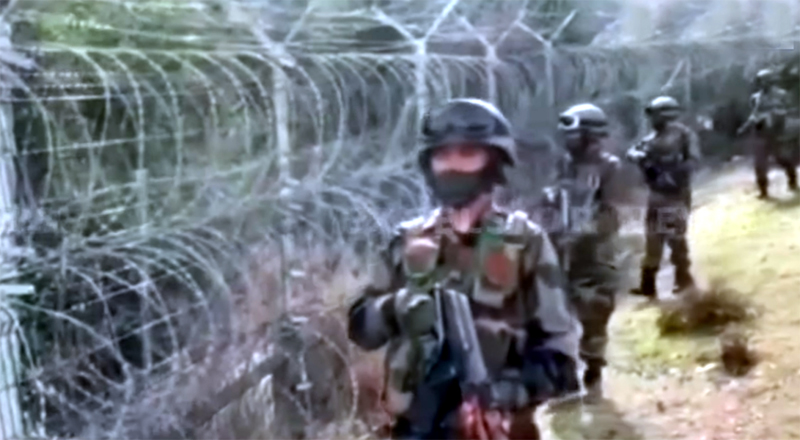 Excelsior Correspondent
SRINAGAR, June 28: Police today said that two persons were killed during cross firing after the Army observed suspicious activity along the Line of Control in Keran sector of Kupwara.
A police spokesman said that arms and ammunition were also recovered from the other side of the fence where the bodies of the duo were found.

The spokesman said that as reported by Army that on June 28 some suspicious movement was observed close to the fence in general area India Gate – Bichu in Keran sector of Kupwara a patrol party.
He said that the suspected movement was challenged by Army’s patrol party.
“On being challenged, fire was drawn on own party from the fence side which was retaliated. On search, two individuals were found dead on own side of fence in possession of four AK rifles, eight magazines and two packets of narcotics whereas two more AK rifles along with magazines and four grenades were found on the other side of fence,” the statement issued by the spokesman read.
It said it is believed that both the individuals identified as Majid Chechi and Samsudin Beigh had come to receive a cache of arms and narcotics, and to facilitate infiltration of militants in the general area of Rauta Nar at fence.
“War like store has been recovered in the operation which include five AK 47 and 56 rifles, one AK rifle Shotgun, 15 magazines,128 7.62mm API rounds, 177 7.62mm ball rounds, 95 grenades and two packets of narcotics. Case has been registered and investigation also been taken up in this regard,” it added.