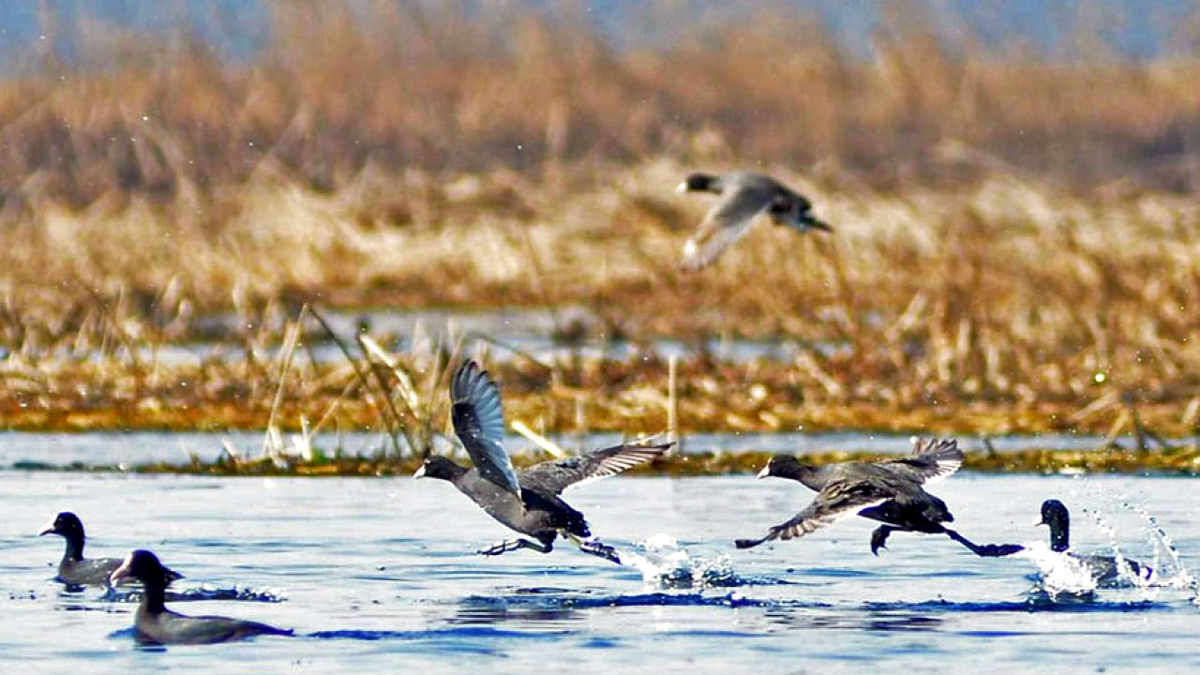 Excelsior Correspondent
Srinagar, Aug 13: Two Kashmiri wetlands are among 11 that were added by the Government to the list of Ramsar sites to make a total 75 Ramsar sites covering an area of 13,26, 677 hectare in the country in the 75th year of Independence.
The wetlands that were declared Ramsar sites today are Shallabugh and Haigam in the North of Srinagar. With the addition of these two, the number of Ramsar sites in Jammu and Kashmir has gone up to 5. Surinsar-Mansar in Jammu and Hokersar and Wullar in Kashmir are already Ramsar sites.
The Ramsar Convention is the inter-governmental treaty that provides the framework for the conservation and wise use of wetlands and their resources. The Convention was adopted in the Iranian city of Ramsar in 1971 and came into force in 1975.
Shallabugh wetland in Ganderbal is spread over 16.0 square kilometers. The wetland is fast losing its sheen and was craving for attention. Encroachment, unabated pollution and lack of conservation measures had drastically affected the eco-system of the wetland.
Lakhs of migratory birds used to come to Shallabugh wetland from far off places like Siberia, Central Asia, Northern Europe, Ladakh, China and Central Asia. Over the years the number of the migratory birds visiting the wetlands decreased drastically.
The Hygam wetland which is spread over 7.25 kilometers is one of the famous wetlands in Baramulla district. It has 1400 hectares of land and the area is dominated by extensive reed beds. It drains into Wullar Lake and its main water sources are Nigle Nullah and Babakul.
Due to large scale encroachments and insensitivity of authorities to keep check on human interference in the wetland, it has reduced to a big pond, forcing migratory birds to find an alternative habitat as their winter home.
Some of the popular migratory birds visiting the Shallabugh and Hygam wetlands include Geese, Bar Geese, White Heeled Duck, Shoveller, Red-Crested Pochard, White-Eyed Pochard, Common Teal, Pintail, Mallard, Gadwall, Coot, Hoonk and Graylag.
Environmentalist Dr Sheikh Ghulam Rasool told Excelsior said that it is a welcome step as they urgently needed conservation. “We hope that it will help in their conservation and ensure that encroachments are stopped and removed. We hope local community will be involved in the conservation. We expect more migratory birds to come to these wetlands,” he said.
Ministry of Environment, Forests and Climate Change said, the 11 new sites include, four in Tamil Nadu, three in Odisha, two in Jammu and Kashmir and one each in Madhya Pradesh and Maharashtra. Designation of these sites would help in conservation and management of wetlands and wise use of their resources.
India is one of the Contracting Parties to Ramsar Convention, signed in Ramsar, Iran in 1971. India signed it on 1st February 1982. During 1982 to 2013, a total of 26 sites were added to the list of Ramsar sites, however, during 2014 to 2022, the country has added 49 new wetlands to the list of Ramsar sites.
During this year itself, a total of 28 sites have been declared as Ramsar sites. Based on the date of designation mentioned on Ramsar Certificate, the number is 19 for 2022 and 14 for 2021. Tamil Nadu has maximum number of Ramsar sites which is 14, followed by Uttar Pradesh which has 10.