DEHRADUN: The scale of devastation caused by heavy rains in Uttarakhand unfolded on Monday with the recovery of more bodies, taking the toll in rain-related incidents in the state to 10, nine of them in cloudbursts in Uttarkashi district alone where a number of people are still missing.

“Eight bodies have been recovered so far, five from Makudi and three from Arakot village. A number of people from six rain-hit villages are still missing. Though names of five persons have been received, the number of those missing could be higher,” Uttarkashi Disaster Management Officer Devendra Patwal said on phone.

One casualty was reported from Tehri district where a tree fell on a woman killing her on the spot on Sunday.

Several houses and hectares of agricultural land were washed away as torrential rains inundated six villages in Mori block of Uttarkashi which borders on Himachal Pradesh in the early hours on Sunday.

Rescue and search operation, which was hampered by heavy rain lashing the region on Sunday, has been resumed on Monday amid clear weather, Patwal said. People trapped in affected areas are being shifted to safe locations and relief material being made available to them, he said.

With the MeT department predicting heavy rains in various parts of the state on Monday, government schools and Anganwadi kendras in nine out of the 13 districts remained closed on the orders of their respective district administrations. (AGENCIES) 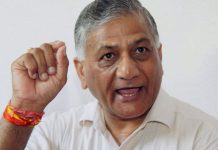