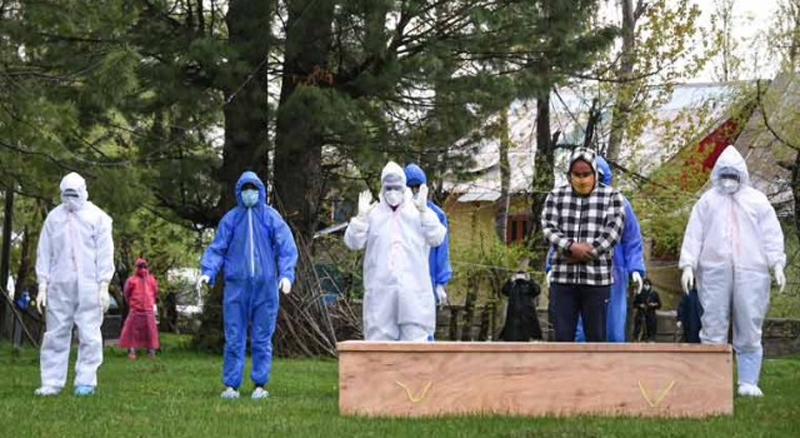 Fayaz Bukhari
SRINAGAR, Aug 10 : Ten people died due to COVID-19 in Kashmir today taking the toll in Jammu and Kashmir to 485 and 368 people tested positive in the Valley taking the tally past 25000 mark.
The dead include a 70-year-old man from Palpora Kulgam, a woman from Buchoo Tral Pulwama, a 65-year-old man from Chidibugh Tral Pulwama, a 71-year-old man from Yaripora Kulgam, a 45-year-old man from Palpora Srinagar, a sexagenarian man from Arampora Ganderbal, a 47-year-old man from Rainawari Srinagar and a 65-year-old woman from Budgam.
The 70-year old man from Palpora Kulgam was brought to hospital yesterday in Kulgam and died the same day. The family had called officials on COVID-19 helpline and later he was brought to the hospital and died shortly after admission. He later tested positive for the Novel Coronavirus.
The woman from Buchoo Tral in Pulwama district was admitted to SMHS hospital Srinagar as a case of bilateral community acquired pneumonia and died last night. Her COVID swab tested positive.
A 65-year-old man from Tral who was admitted to SMHS hospital on August 1 and was later diagnosed with bilateral pneumonia died today.
The man from Yaripora in Kulgam was admitted on August 1 as a case of “BHP, HTN and bilateral viral Pneumonia.” He died this afternoon.
Meanwhile, regarding four other deaths, they said, two each were reported from SKIMS Soura and SMHS here. All of them had underlying ailments, they said.
A man from Rainawari who was admitted with bilateral pneumonia to SMHS hospital on August 1 passed away last night.
A woman from Budgam was admitted to the SMHS hospital on 23rd July with bilateral pneumonia and she died this morning.
A man from Palpora area of Srinagar who was admitted to SKIMS Soura on 21st July died today.
A man from Arampora Ganderbal who was admitted on August 6 to SKIMS died today.
A 60-year-old man from Shalimar was admitted with pneumonia on 5th August in SMHS hospital died today.
A 78-year-old man from Braripora Safa Kadal Srinagar who was admitted in SMHS hospital on August 1 with blood pressure, hypertension and viral pneumonia died today.
With these deaths, 485 people have died due to COVID in Jammu and Kashmir so far including 450 from the Valley and 35 from Jammu division.
Srinagar district with 155 deaths topped the list followed by Baramulla 82, Budgam 36, Anantnag 33, Kulgam 32, Pulwama 32, Kupwara 27, Shopian 24, Bandipora 18 and Ganderbal 8.
And 368 people tested positive for COVID-19 in Kashmir today taking the tally past 25000 mark.
Srinagar reported 115, Baramulla 41, Pulwama 30, Kulgam 10, Shopian 14, Anantnag 16, Budgam 31, Kupwara 17, Bandipora 79 and Ganderbal 15 cases today.
In Kashmir, Srinagar topped the list with 6263 cases followed by Baramulla with 2178, Pulwama 1860, Kulgam 1619, Budgam 1568, Shopian 1534, Anantnag 1569, Kupwara 1273, Bandipora 1101 and Ganderbal 689.
Moreover, 282 more COVID-19 patients recovered and were discharged from various hospitals in Kashmir.