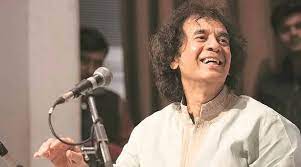 SINGAPORE, Aug 13: Tabla maestro Zakir Hussain says his feelings for India cannot be described in words as the country holds a very special place in his heart.
“It is a feeling that is beyond explanation. India is a very special country for me. It is like a music symphony that despite different components of music are able to make a unify projection of great creativity,” Hussain said at a press conference held on Saturday.
“Having been born there, grown up there, learned my art there and educated there and even now, after having established residence in America for over 40 years, I still carry my Indian passport,” he added.
Hussain, who is here for a concert on the eve of India’s 75th year of Independence, said Indian music grew and represented the country way before business houses came by to make it one of the economic powers of the world.
In the 1960s-70s, the world looked at India and appreciated what it had to offer, yoga, meditation, music and cuisine, he added.
“When the people talked about India, they talked about the culture and its music. And you cannot exclude a country from its culture,” said Hussain.
A country is loved, respected, honoured and revered because of its culture, and not alone based on its wealth of reserves, the table maestro added.
He said legendary musicians Ravi Shankar, Bismillah Khan and many great artists from the country travelled all over the world, regaled the audiences and brought attention to India’s cultural creativity.
“For that, I appreciate all the efforts put in by these great maestros. And, it is still being done. And people like me have a chance to travel around the world because the platform was created by the great maestros.”
The concert by Singapore Indian Fine Arts Society (SIFAS), supported by the High Commission of India, will be staged on Sunday, celebrating the close cultural ties between Singapore and India.
Hussain, the world-famous table virtuoso, will be joined by Indian maestros Kala Ramnath on violin and Jayanthi Kumaresh on veena.
Welcoming the maestros to Singapore, Indian High Commissioner P Kumaran said, “It is the brilliance of artistes whom we have here today which makes India proud globally.”
“They are an international phenomena and India’s national treasure, and this year gives us an opportunity to celebrate our incredible Arts and Artists for their tremendous contribution,” he added.
Cultural linkages between India and Singapore span the millennia, he said, adding, “it is very encouraging to see the continuity of cultural bonds between India and Singapore and the enthusiastic support to Indian arts and artists here.” (PTI)