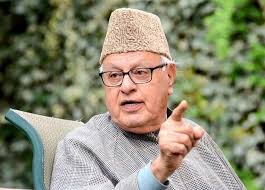 AMARAVATI: The YSR Congress on Wednesday said it would file a defamation case against National Conference leader Farooq Abdullah for alleging that Y S Jagan Mohan Reddy offered Rs 1,500 crore to the Congress if it made him Chief Minister of the then united Andhra Pradesh.

Abdullah levelled this allegation while addressing an election campaign meeting in support of the ruling Telugu Desam Party at Kadapa on Tuesday.

We are sending him a defamation notice for making baseless allegations against our leader Jagan,” the YSRC general secretary said. (AGENCIES)