E-Paper
Home National Your votes to decide if J’khand will walk on path of devpt... 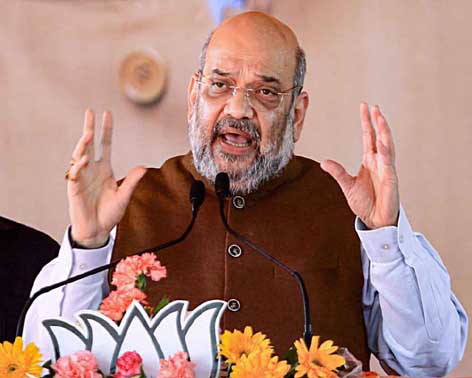 CHAKRADHARPUR, Dec 2:
BJP national president Amit
Shah on Monday urged the people of Jharkhand to exercise franchise in favour of his party, contending that their votes would determine if the state walked on the path of development or Naxalism.
Addressing a poll meeting here, he said national and local issues were equally important for Jharkhand as people in the state wanted terrorism to be rooted out just as Naxalism.
“A majority of the jawans who are guarding the borders are from Jharkhand. People of this state want terrorism and Naxalism to be rooted out. Modi ji (Prime Minister Narendra Modi) had given a befitting reply to the terrorists through air and surgical strikes, he claimed.
Iterating that the BJP-led central government would drive out illegal immigrants from the country, Shah said “NRC will be implemented by 2024”.
He challenged Congress leader Rahul Gandhi, who is also in Jharkhand, to give an account of his partys development programmes in the region over the past 55 years.
“Congress leader Rahul Gandhi is in Jharkhand today. I would like to ask him to give an account of his partys development programmes of 55 years, we are here with our account of five years, he stated.
Taking a dig at the opposition camp, Shah, who is also the Union home minister, said parties that exploit tribals, indulge in graft worth crores, and buy and sell poll tickets could never work for Jharkhand’s development.
He slammed former chief minister and JMM leader Hemant Soren for forging a pre-poll alliance with the Congress.
“When the BJP and Guru ji (JMM chief Shibu Soren) were agitating for a separate Jharkhand, the Congress had opposed the demand, fired bullets at the youth of the state. I want to ask Hemant ji what prompted him to join hands with the Congress, Shah said.
Listing the achievements of the Raghubar Das-led government in the state, the Union minister said it was the BJP that brought the Anti-conversion Act to penalise forcible religious conversions in the state.
Your votes will decide the future of Jharkhand; whether the state will walk on path of development or Naxalism, the BJP chief added.
Assembly elections are being held in Jharkhand in five phases. Chakradharpur will go to polls in the second phase on December 7.
The BJP has fielded partys state unit chief Laxman Gilua from the seat. (PTI)