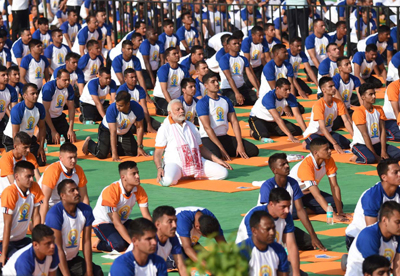 DEHRADUN, June 21: Prime Minister Narendra Modi today performed yoga with over 50,000 enthusiasts at the Forest Research Institute (FRI) campus here and said the ancient Indian discipline has emerged as a “powerful unifying” force in a strife-torn world.
Addressing a large gathering with the British-era FRI building in the backdrop, Modi said yoga has shown the world the way from “illness to wellness” and enriching lives across the globe.
He said in fact, yoga has become the biggest mass movement across the globe in the quest for good health and wellbeing, which is crucial to the creation of a peaceful world.
“Dehradun to Dublin, Shanghai to Chicago, Jakarta to Johannesburg, Himalayan highlands or sunburnt deserts, yoga is enriching millions of lives all over the world.
Click here to watch video
“Yoga fosters amity in societies, which can form the basis of national unity,” the Prime Minister said.
Modi said apart from being an art of holistic health, yoga had the power to unite people and countries, and pave the way for universal brotherhood.
“When disintegrating forces gain prominence it is yoga that unites, creates amity in societies, which forms the basis of national unity and unity among nations, and finally leads to universal peace and brotherhood. It has become a powerful unifying force,” he said.
He said the proposal for a International Day for Yoga at the UN was accepted in record time with a majority of nations supporting it.
“The proposal was passed by the UN in the shortest time which is a record in its history,” the Prime Minister said.
Today, people all over the world have come to look upon yoga as something which belongs to them, Modi said.
He also asked the people to learn to honour their own legacy and heritage if they wanted the rest of the world to respect them.
“The gems of India’s unique heritage such as yoga will be respected by the world at large only when we ourselves respect our culture and traditions, and take part in our legacy and heritage,” he said.
Modi said the way to lead a calm, creative and content life was yoga.
“In yoga, we have the perfect solution to the problems we face, either as individuals or in our society,” the Prime Minister said.
“Instead of dividing, yoga unites. Instead of further animosity, yoga assimilates. Instead of increasing suffering, yoga heals,” he said.
Modi said yoga presents a ray of hope for future of the world. Yoga is beautiful because it is ancient yet modern, and it is constantly evolving, he said.
“India’s legacy of which yoga is a significant part is unique and rich. We must take pride in it,” the Prime Minister said, adding that it has the power to promote universal bortherhood as it unites and assimilates instead of dividing.
“From Tokyo to Toronto from Stockholm to Sao Paulo yoga has become a positive influence in the lives of millions,” Modi said.
He asked people to embrace yoga not just for a healthy, but happy and peaceful life.
The growing popularity of yoga across the globe has brought India closer to the world and this position is going to get strengthened in times to come, he said.
Describing Uttarakhand as a sacred land, Modi said it had been the centre of yoga for ages.
“We are blessed to have gathered on this occasion on a land which has been the centre of yoga and Ayurveda for ages, and attracted the likes of Adi Guru Shankaracharya and Swami Vivekananda. It exudes extraordinary energy,” he said.
Uttarakhand Governor K K Paul, Chief Minister Trivendra Singh Rawat, Union Minister for AYUSH Shripad Naik and state AYUSH Minister Harak Singh Rawat were also present at the event.
Trivendra Singh Rawat gifted the PM a bottle of oil extracted from a rose for the first time in the State and thanked him for selecting Uttarakhand for the main Yoga Day event.
“I can say with full confidence today that Atalji (former Prime Minister Atal Bihari Vajpayee) created Uttarakhand and the Prime Minister (Modi) is building it,” the Chief Minister said.
Modi had arrived here last night to participate in the main event on the fourth International Yoga Day.
Elaborate security arrangements were made and nearly 3,000 security personnel deployed in and around the venue. The campus was under CCTV camera surveillance.
Modi arrived at the FRI at around 6.30 am and addressed the people before performing asanas with them.
The yoga session lasted around 30 minutes during which he performed different asanas, including pranayama and breathing exercises.
Yesterday, while greeting yoga enthusiasts across the world, the Prime Minister had said that this exercise is one of the most precious gifts given by the ancient Indian sages to humankind.
Modi in 2015 lead the yoga celebrations at Rajpath in New Delhi and in 2016 at the Capitol Complex in Chandigarh. Last year he participated at an event at the Ramabai Ambedkar Sabha Sthal in Lucknow. (PTI)