JAMMU, Oct 1: Dozens of Youth Congress (YC) activists here today staged a protest demonstration against the arrest of former Congress president, Rahul Gandhi while he was on way to Hathras to meet family members of rape victim.
The protest was organised by YC in presence of Harsimrit Kour, IYC Secretary and Incharge J&K and under the leadership of J&K PYC President, Uday Chib in which party activists raised slogans against UP Police and UP Government for alleged unconstitutional arrest of Rahul Gandhi.
Talking to reporters, Harsimrit Kour termed the arrest as unconstitutional and said that barring the Congress leader to hold peaceful protest as undemocratic.
She also claimed that UP Government has denied justice to the gang rape victim who died a couple of days back.
“The victim was denied justice even after her death,” Kour claimed demanding stern punishment to the accused in the gang-rape and murder of 19 year old Dalit girl who was raped, tortured and humiliated and left to die.
Uday Chib said that UP Government has failed to do justice with the teenage girl.
He demanded immediate resignation of UP CM Yogi Adityanath and lambasted his administration for failing to control rape accidents in UP.
Ajaz Choudhary, Vice President JKPYC; Ricky Dalotra, Ranjeet Chopra, Nimrandeep Singh, Sahil Singh , Dalvir Sethi, General Secretaries JKPYC; Vishal Chopra, Sandeep Sharma, Spokesperson JKPYC; Barinder Singh, Latish Sharma, Divenyash Jamwal, Ankush Raina, Nakul Sharma, Arjun Sharma, AYC Presidents and others were also present in the protest demonstration. 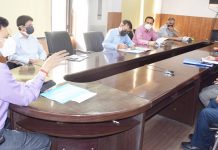