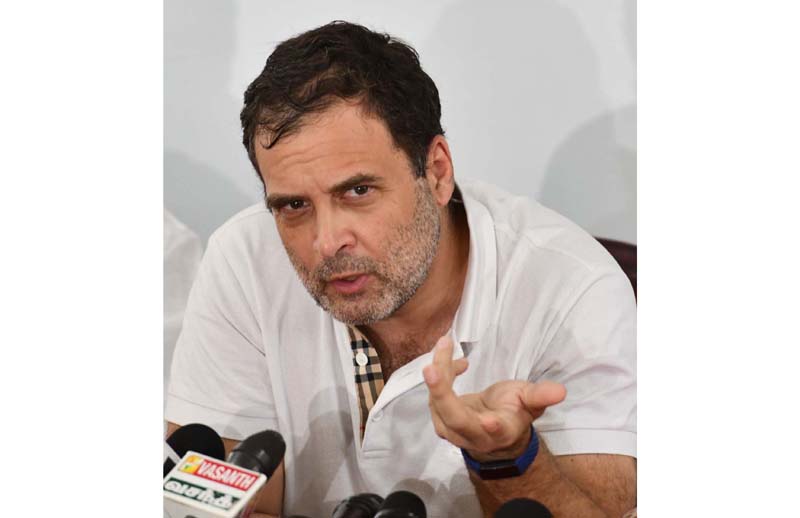 ALAPPUZHA  (Kerala), Sep 18:  Without harmony, there is no progress, without progress, there are no jobs and without jobs, there is no future, said Congress leader Rahul Gandhi on Sunday while addressing  thousands of people who gathered to hear him during the conclusion of Sunday’s ‘Bharat Jodo Yatra’ at Vandanam near here.

Gandhi continued his attack on the BJP and Prime Minister Narendra Modi and said the saffron party was dividing the country on religious and linguistic lines.

He said a handful of businessmen, close to the Prime Minister, can monopolise any business they want but a common man was still unable to get a loan.

At the end of the 11-day of the yatra which began from Kanyakumari on September 7, Gandhi criticised the the Left Government in Kerala also and said the unscientifically constructed roads were creating backaches for the users.

He said the trauma care facilities in hospitals of Alappuzha need to be improved.

“A part of the ‘rice bowl’ of Kerala, Alappuzha has shown me something new – a glimpse into Kuttanad farming, a sub-sea level paddy cultivation technique. The Kuttanad farmers, whom I met today, are affected by environmental changes and the insensitive attitude of the State and the Central govts. They were hopeful though that the yatra will bring relief and give them representation. The rubber farmers, too, mirrored similar hopes and expectations from the yatra,” Gandhi posted on Facebook.

He said the situation of the cashew, coir and unemployed youngsters are the same in the country and it was impossible for them to realise their dreams and hopes.

“A home where brothers fight each other cannot progress and that’s what the BJP is doing to our country. And they are doing it to benefit two or three extremely rich people. A handful of businessmen close to the prime minister can monopolise any business sector. If they want roads, ports, airports, anything they want to monopolise, they can,” he told the gathering.

Gandhi said the Prime Minister claims that the issues like high price for essential commodities, unemployment, the issues faced by the common people and all can be solved within a second.

“But, I don’t want to lie to my people. These are complicated issues which cannot be resolved if our country stands divided. Hatred will never fix roads, solve unemployment or bring the prices of essential items down, ” Gandhi said.

The Congress leader said it was a learning experience to move through the beautiful land of Kerala, encountering its rich diversities, and added that it was “humbling to have stalwart leaders of the Congress party, like former Chie Minister of Kerala, Shri Oommen Chandy walking beside me”.

Gandhi met also the families affected by sand-mining who are protesting for 466 days.

“…Protesting for 466 days unsure each day if their land, lives and livelihoods will see a better tomorrow. It is for all these people that I have pledged to walk. It is to give them a voice, and hope. It is to fight for what they truly deserve,” he said.

The yatra has completed more than 200 kms so far and has halted for today.

It would resume tomorrow morning from Punnapra in Alappuzha district

Hundreds of people, including women and children, thronged both sides of the road to get a glimpse of Gandhi.

“These are not just pictures, these are the feelings of each and every citizen of the country, of their hope, of their unity, of their strength, of their love,” Gandhi said in a Facebook post with some pictures of those who came to meet him.

A girl presented him with a drawing she made. Gandhi interacted also with cyclists whom he met en route.

People were seen rushing to talk and hug Gandhi. He was seen lending an ear to their woes and discussing their hopes and aspirations.

Gandhi tweeted: “Without harmony, there is no progress. Without progress, there are no jobs. Without jobs, there is no future. The #BharatJodoYatra is uniting the voices of despair, to break the shackles of unemployment.”

The yatra members would be stopping at Carmel College of Engineering and Technology, Punnapra, which is 3.4 km away.

The Congress party’s 3,570 km and 150-day long foot march started from Kanyakumari in Tamil Nadu on September 7 and would conclude in Jammu and Kashmir.

The Bharat Jodo Yatra, which entered Kerala on the evening of September 10 evening, would go through the State covering 450 km, touching seven districts over a period of 19 days before entering Karnataka on October 1.  (PTI)